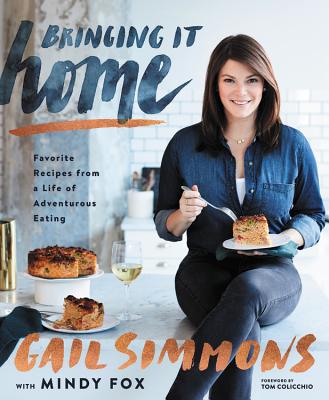 Favorite Recipes from a Life of Adventurous Eating

The cookbook that Top Chef fans have been waiting for, from the celebrated judge who makes delicious food and inspired cooking accessible for home cooks.

Gail Simmons is a beloved figure in the food world who has been a popular judge on Top Chef, the number-one rated food show on cable television since its inception. In Bringing It Home, Simmons shares her best recipes and food experiences. From her travels, exploring global flavors and keeping detailed diaries, to her Top Chef culinary adventures with the world's most notable chefs, she is always asking: "How can I bring this dish home to my own kitchen?" Her goal is to make fabulous recipes using accessible ingredients and smart, simple cooking techniques for successful family meals and easy entertaining.

From Bloody Mary Eggs to Christmas Brisket Fried Rice; from Summer Vegetable Salad with Charred Lime Vinaigrette to Banana-Cardamom Upside Down Cake with Salty Caramel, there is a recipe for everyone in the family. Simmons also shares ingredient tips, cooking techniques, and many informative "Snippets," as well as personal and behind-the-scenes stories that will appeal to fans and food lovers everywhere.

Praise For Bringing It Home: Favorite Recipes from a Life of Adventurous Eating…

I trust Gail's taste when it comes to chefs and food, and I have for many years. She is a beautiful force in the culinary world, and has the ability to translate her expertise so you can truly learn from her.—Drew Barrymore, actress and director

Gail has truly been inspired by her mother's cooking and her encounters with some of the greatest American chefs. She has mastered a knowledge of tradition and the art of casual cuisine shared among family and friends and is a well-travelled cook who combines her past and present culinary adventures. Driven by her desire to cook in a personal way, Gail's book brings you the dishes she fell in love with. BRINGING IT HOME is a wealth of know-how for any avid home cook.—Daniel Boulud, chef/owner, the Dinex Group

If there's a gal who's game for anything, it's Gail. She's a woman of exploration and adventure. Born and bred to be a lover of great food, Gail is a force to be reckoned with. Whether she's reading, writing, critiquing, or honing worldly inspiration hands-on, her mind (and appetite) is a sponge for every delicious bite along the way. A front row seat to a simple snack or insane meal cooked by this wonder woman? We are in great hands.—Christina Tosi, founder, CEO, and chef, Milk Bar

The recipes look so good that they might kind of compete for your attention as to what you might want to try first, but what's also special about Gail's book is that she's helping to teach how to be a great instinctual chef even beyond the recipes. She shares all sorts of techniques and kitchen secrets to arm you for whatever you decide to make.—Bravotv.com

Most people know Gail Simmons from her longtime gig as one of the judges on Top Chef, but behind the tough-minded critic lies an avid home cook-and a born teacher. Along with food writer (and frequent Epi contributor) Mindy Fox, she's crafted a super-approachable slew of recipes that have surprise insights tucked away.—Epicurious

Gail Simmons is a trained culinary expert, the special projects director at Food & Wine, and a judge on Bravo's Emmy-winning series Top Chef since its inception in 2006. Simmons makes frequent television appearances on Today, Good Morning America, The Chew, and The Talk, and has been featured in New York magazine, Travel + Leisure, GQ, and People, among others. Her first book, a memoir titled Talking with My Mouth Full: My Life as a Professional Eater, was published in 2012. She lives in Brooklyn with her husband and daughter.

Mindy Fox is a writer, editor, producer, and former restaurant cook, who has authored and co-authored many cookbooks, including Salads: Beyond the Bowl and The Perfectly Roasted Chicken. A former editor at Saveur and La Cucina Italiana, her work has also appeared in Food & Wine, Fine Cooking, In Style, Epicurious, The London Times, and more. She lives in New York City.
Loading...
or
Not Currently Available for Direct Purchase