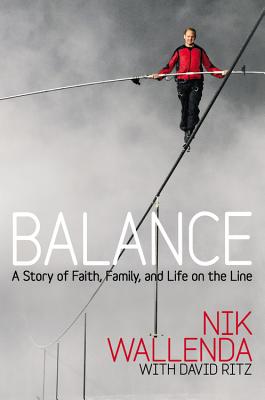 A Story of Faith, Family, and Life on the Line

Nik Wallenda, "King of the High Wire," doesn't know fear. As a seventh generation of the legendary Wallenda family, he grew up performing, entertaining, and pushing the boundaries of gravity and balance.

When Nik was four years old, he watched a video from 1978 of his great grandfather, Karl Wallenda, walking between the towers of the Condado Plaza Hotel in Puerto Rico, stumbling, and falling to his death because of improper rigging. When Nik heard his father quote his great-grandfather-"Life is on the wire, everything else is just waiting"-the words resonated deep within his soul and he vowed to be a hero like Karl Wallenda.

Balance is the theme of Nik's life: between his work and family, his faith in God and artistry, his body and soul. It resonates from him when performing and when no one is looking. When walking across Niagara Falls, he prayed aloud the entire time, and to keep his lust for glory and fame in check, Nik returned to the site of his performance the next day and spent three hours cleaning up trash left by the crowd.

Nik Wallenda is an entertainer who wants to not only thrill hearts, but to change hearts for Christ. Christ is the balance pole that keeps him from falling.

Nik Wallenda is an entertainer who wants to not only thrill hearts, but to change hearts for Christ. Christ is the balance pole that keeps him from falling.

Praise For Balance: A Story of Faith, Family, and Life on the Line…

"This book makes an irrefutable case for relying on faith as a source of balance and strength."—Booklist Online

On June 15, 2012, high wire artist, Nik Wallenda joined the ranks of legendary daredevils when he became the first person ever to walk across the roaring Niagara Falls. The broadcast was aired on ABC to over thirteen million Americans. Nik is the 7th generation of the Great Wallendas. Every walk Nik does is in honor of his great-grandfather, Karl Wallenda, who died on the wire in 1978. Nik has been performing on a high wire since before he was born when his mother (who still performs with him today) walked while she was six months pregnant with Nik. The Niagara Falls walk marks Nik's 7th World Record. By his side on the wire is his wife, Erendira, circus royalty. Learn more at www.nikwallenda.com.
Loading...
or support indie stores by buying on