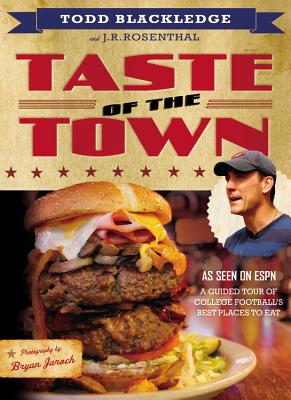 Taste of the Town

A Guided Tour of College Football's Best Places to Eat

College football culture is captured through the food, small town characters, and college life that makes Saturdays in autumn something fans look forward to every year. In TASTE OF THE TOWN, Todd Blackledge, host of the enormously popular ESPN segment "Taste of the Town," focuses on popular college towns by telling you where to eat, what to eat, and great stories about college football traditions across America. With over 100 recipes from the chefs of the featured restaurants and the coach (or wife) of the hometown team you will be left hungry and excited to try out the popular football food for yourselves! Behind-the-scenes photos, shot on location, enhance the energy of the fun and food featured in each town. This book about football, food, and college culture showcases the coaches, players, chefs, and rabid fans who regularly join together to talk about their common passion.

Praise For Taste of the Town: A Guided Tour of College Football's Best Places to Eat…

Todd Blackledge was a three year starting QB for Penn State before being drafted by the Kansas City Chiefs in 1983. After seven NFL seasons with the Chiefs and the Pittsburgh Steelers, he began a career as a college football analyst, working for the Big East Television Network, ABC Sports and CBS Sports. Since 2006 he has worked for ESPN calling Saturday Night Primetime games with Mike Patrick and currently Brad Nessler, and launched "Taste of the Town" in 2007. Todd lives in Canton, OH with his wife and four sons.

JR Rosenthal has a master's of science in journalism from Northwestern University and has written eleven book, including Nolan Ryan's Pitcher's Bible, Randy Johnson's Power Pitching, Don Mattingly's Hitting is Simple, Pitch Like a Pro with Leo Mazzone and Tony Gwynn's Total Baseball Player. He also is an accomplished chef and is currently working with Nolan Ryan on a cookbook/cattle ranching memoir.
Bryan Jaroch graduated from Hamilton College with a bachelor's degree in Psychology in 1997. He is currently a Producer at ESPN, where he has worked since 1999. He produced "Taste of the Town" segments during the 2008 and 2010 college football seasons, and took hundreds of behind-the-scenes still photos. The photos from the 2008 season were featured in an article on ESPN.com. Since then he has published several photographs in travel guides and continues to expand his photography portfolio. Bryan lives in West Hartford, Connecticut, with his wife and son.