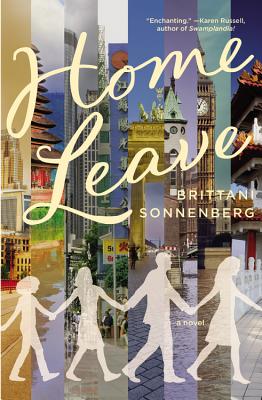 Chris Kriegstein is a man on the move, with a global career that catapults his family across North America, Europe, and Asia. For his wife, Elise, the hardship of chronic relocation is soothed by the allure of reinvention. Over the years, Elise shape-shifts: once a secretive Southern Baptist, she finds herself becoming a seasoned expat in Shanghai, an unapologetic adulterer in Thailand, and, finally, a renowned interior decorator in Madison.

But it's the Kriegstein daughters, Leah and Sophie, who face the most tumult. Fiercely protective of each other--but also fiercely competitive--the two sisters long for stability in an ever-changing environment. With each new move, the girls find they can count on only one thing: the consoling, confounding presence of each other.

When the family suffers an unimaginable loss, they can't help but wonder: Was it meant to be, or did one decision change their lives forever? And what does it mean when home is everywhere and nowhere at the same time? With humor and heart, Brittani Sonnenberg chases this wildly loveable family through the excitement and anguish of their adventures around the world.

Praise For Home Leave: A Novel…

"Sonnenberg writes about expatriate life with an easy authority. . . . [She] is most interesting when she allows herself flights into the otherworldly. A house that longs for the family who once occupied it narrates the opening section. Sonnenberg introduces these stylistic conceits slyly. . . . In the elegiac final third of Home Leave, daughter Leah emerges as the book's emotional core. . . . This sets up an interesting contrast between the psychologies of mom and daughter: one never wanting to be fully known, the other never expecting to be found familiar. It's a dynamic that whets the appetite for what's to come in American expat literature."—Megan Hustad, The New York Times Book Review ("Editor's Choice")

"[A] compelling debut. . . [Home Leave] reveals a dialectical truth about families; they are places of joyous hope, and also crushing loneliness."—Los Angeles Review of Books

"A lyrical meditation on loss, geographical place, expatriate experience, sibling rivalry, family, and growing up. Sonnenberg writes with clarity about the messiness of the expat Kriegstein family's lives. . . . Sonnenberg captures beautifully what it's like to grow up as an American abroad, not as a tourist but not fully as a native either."—Cleaver Magazine

"[An] inventive debut . . . Captures the everywhere-but-nowhere paradoxes of our global world."—Vogue.com (A "Summer Book" selection)

"[A] striking debut."—Bethanne Patrick, Washingtonian ("A Top 10 Book for June")

"Emotionally charged . . . The Kreigsteins are such authentic and complex characters that readers will be captivated by all of them."—Real Simple ("The Best Books of 2014")

"Stark but sweet, warm and wise, Home Leave is an ambitious, well-executed debut. . . [it] will leave many readers hoping for another Sonnenberg novel full of the same humor, compassion and honesty."—Minneapolis Star-Tribune

"The lucidity of Sonnenberg's prose . . . is notable for its stark honesty and sharply observed details. . . . [An] ambitious debut."—Kirkus Reviews

"Sonnenberg writes like a house on fire. The opening chapter alone is worth the price of this book."—ReadHerLikeanOpenBook.wordpress.com

"HOME LEAVE is a rich, lively novel. Original in conception and set in various continents, it describes migrations as a contemporary existential condition. More importantly, it shows how this condition effects change, loss, and growth in the migrants. It offers many insights that are true."—Ha Jin, National Book Award winner for Waiting

"It's hard to believe that this astonishing novel is Brittani Sonnenberg's first--she writes about family with wisdom, humor, and native daring. Here is Persephone's journey, undertaken by an entire family, the Kriegsteins, who ricochet through time zones, moving from Berlin to Singapore to Wisconsin to Shanghai to Atlanta, together and alone. Sonnenberg's prose is so vital and so enchanting that you will read this book in the dilated state of a world-traveler, with all of your senses wide open. Her family members are so well-drawn and complex that you'll close this book certain they exist."—Karen Russell, author of Swamplandia! and Vampires in the Lemon Grove

"A captivating tour de force that follows a nomadic family across generations and continents."—filmmaker Wim Wenders

"Brittani Sonnenberg, like the best storytellers, shows us what we carry and what we leave behind as we travel across time zones (from America to Germany to Singapore), as we sit in airports, alone with the aloneness, as we love, live, grieve, and then try to live once more. Authentic, beautiful, bravely-told, HOME LEAVE is alive with characters you want to protect and hold-characters you won't want to leave behind."—Nami Mun, author of Miles from Nowhere

"HOME LEAVEis a remarkable debut, notable for the insightful intimacy of its characterization and a restless formal invention which perfectly evokes the uncertainties of expatriate life."—Peter Ho Davies, author of The Welsh Girl

"Utterly convincing in its observations and confusions, Home Leave captures the realities of a globetrotting life with aplomb and poignancy. What a marvel!"—Gish Jen, author of Who's Irish and The Love Wife

Brittani Sonnenberg was raised across three continents and has worked as a journalist in Germany, China, and throughout Southeast Asia. A graduate of Harvard, she received her MFA in fiction from the University of Michigan. Her fiction has been published in The O. Henry Prize Stories 2008 as well as Ploughshares, Short Fiction,and Asymptote. Her nonfiction has appeared in Time, the Associated Press, the Minneapolis Star Tribune, and NPR Berlin. She has taught creative writing at the University of Michigan, Carleton College, and the University of Hong Kong. She is currently based in Berlin. HOME LEAVE is her first novel.
Loading...
or
Not Currently Available for Direct Purchase