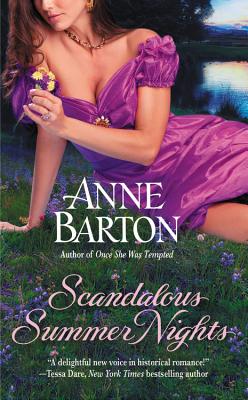 From "a delightful new voice in historical romance" (Tessa Dare, New York Times bestselling author) comes a scandalous Regency romance about a sinful rogue who falls in love with his best-friend's little sister.

Lady Olivia Sherbourne isn't shy about speaking her mind, except when it comes to James Averill. For ten long years he has been her brother's best friend and her heart's only desire. But when Olivia hears James will soon set sail for an expedition to Egypt, she knows the time has come to make her move. It's now or never . . .

James has always found Olivia bewitchingly attractive, but what kind of gentleman takes up with his best friend's sister? Not that he's thinking particularly gentlemanly thoughts when she appears on his exploratory trip-three hundred miles from home -- and incites a tavern fight. No matter what the devil she's doing there, it's his duty to see her safely back to her family. But how safe will she be when every starlit night brings wicked temptation?

"Anne Barton is a delightful new voice in historical romance! ONCE SHE WAS TEMPTED is a charming read, with characters who are easy to love."—Tessa Dare, New York Times bestselling author

"Sensual and solid, this debut is a story demanding to be read. The characters are believable and relatable, and Barton smartly blends issues of morality and Regency era social class with passion and excitement."—Publisher's Weekly, Starred Review, on When She Was Wicked

"Stunning and heart melting...When She Was Wicked is a beautifully written Regency Romance that I fell deeply in love with! Anne Barton has succeeded in writing the perfect debut. This is a must read that you do not want to miss!"—Harlequin Junkie on When She Was Wicked

"4 stars! Delightfully smart, fun, fast-paced and just different enough for readers to take note of Barton's charming voice, this novel is filled with wry humor and compassion intrigues readers."—RT Book Reviews on When She Was Wicked

"When She Was Wicked is a delightful debut! Anne Barton's cast of characters is charming and witty. Owen is the type of hero that readers fall in love with from the very first introduction, and Anabelle is ingenious and resourcefully cunning--a girl after my own heart."—Tiffany Clare on When She Was Wicked

"Break out the bubbly for Anne Barton's delightful debut!"—Vicky Dreiling, award-winning author on When She Was Wicked