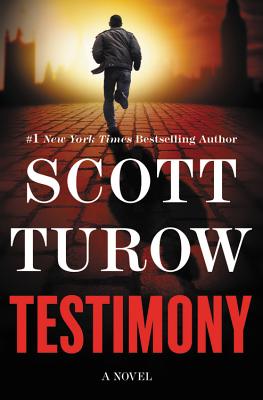 Scott Turow, #1 New York Times bestselling author and "one of the major writers in America" (NPR), returns with a page-turning legal thriller about an American prosecutor's investigation of a refugee camp's mystifying disappearance.

At the age of fifty, former prosecutor Bill ten Boom has walked out on everything he thought was important to him: his law career, his wife, Kindle County, even his country. Still, when he is tapped by the International Criminal Court--an organization charged with prosecuting crimes against humanity--he feels drawn to what will become the most elusive case of his career. Over ten years ago, in the apocalyptic chaos following the Bosnian war, an entire Roma refugee camp vanished. Now for the first time, a witness has stepped forward: Ferko Rincic claims that armed men marched the camp's Gypsy residents to a cave in the middle of the night--and then with a hand grenade set off an avalanche, burying 400 people alive. Only Ferko survived.

Boom's task is to examine Ferko's claims and determinine who might have massacred the Roma. His investigation takes him from the International Criminal Court's base in Holland to the cities and villages of Bosnia and secret meetings in Washington, DC, as Boom sorts through a host of suspects, ranging from Serb paramilitaries, to organized crime gangs, to the US government itself, while also maneuvering among the alliances and treacheries of those connected to the case: Layton Merriwell, a disgraced US major general desperate to salvage his reputation; Sergeant Major Atilla Doby,a vital cog in American military operations near the camp at the time of the Roma's disappearance; Laza Kajevic, the brutal former leader of the Bosnian Serbs; Esma Czarni, Ferko's alluring barrister; and of course, Ferko himself, on whose testimony the entire case rests-and who may know more than he's telling.

A master of the legal thriller, Scott Turow has returned with his most irresistibly confounding and satisfying novel yet.

"This is at once a thriller, a story of middle-aged angst, an exposition of international law and an exploration of an intensely serious and very nasty episode in recent history...admirable and important."—New York Times Book Review

"The real pleasure of the new novel lies not so much in solving the mystery of the massacre as in watching Turow knock down assumption after assumption made by Boom--and the reader. In fact, I can't think of another novel in which so many givens end up being exposed as either honest mistakes or outright lies. TESTIMONY is a tour de force of collapsing perceptions."—Washington Post

"The master of the courtroom drama, Scott Turow's latest legal thriller goes international and is a page turner not to be missed!"—Daniel Silva, #1 New York Times bestselling author of The Black Widow

"TESTIMONY is Scott Turow's most ambitious and complex work-which takes us from the gritty familiarity of his beloved Kindle County into a mysterious world of international intrigue. It's the best kind of thriller, which stimulates the mind as well as thrilling the heart."—Jeffrey Toobin, New York Times bestselling author of American Heiress

"Turow's lively prose and terrific cast of supporting characters make TESTIMONYone for the beach bag...This is a guy who knows what he's doing: Turow has been crafting intricate, best-selling legal thrillers dating back to his blockbuster wifedunit, Presumed Innocent (30 years ago!)."—USA Today

"Scott Turow writes with zest and authority about the inner workings of the law...TESTIMONY unfolds in highly descriptive prose and is sprinkled with colorful characters."—Atlanta Journal-Constitution

"Turow applies the same storytelling magic to the ICC that has drawn scores of readers into his Kindle County courtrooms, weaving fascinating details about the challenges of prosecuting war crimes into a suspenseful story of redemption and the complexities of justice."—Booklist

"Follows twists and turns, shifting alliances, and a near-fatal confrontation... [TESTIMONY] is exciting and consistent with Turow's prior novels."—The Missourian

"A complex and haunting tale of war crimes that will not only satisfy his courtroom drama devotees but also readers of international thrillers."—Library Journal

"Bestseller Turow (Identical) movingly evokes the horrors of the Balkan wars in this gripping thriller."—Publishers Weekly

"TESTIMONY is an absolutely crackerjack read, and again leaves us wishing that Turow would haul out his typewriter a tad more often."—Winnipeg Free Press

"A thriller yarn with many twists and turns."—Chicago Sun-Times

"Raises important questions of responsibility, patriotism, corruption and the role of military power. And even as it confronts these weighty issues, it keeps the reader engaged in a page-turning thriller...Turow is back on his game in TESTIMONY."—Illinois Times

"Fast-paced...Scott Turow is first and foremost a storyteller, and that's what propels the action, that and trying to figure out the truth...another fine book by this very fine writer."—Washington Times

"[A] smart, demanding thriller."—Washington Post, "17 Thrillers and Mysteries Worth Toting to the Beach"

"Scott Turow has done the impossible: Making the International Criminal Court in The Hague interesting. ..in TESTIMONY it is a hotbed of intrigue and infighting involving a massacre of Roma people in former Yugoslavia and the travails of an American prosecutor."—Bloomberg.com, "Our Favorite Summer Reads"

"Not your average legal thriller. Brilliant? Yes. Compelling? Yes. Complex? Yes. Fraught with misperceptions, twists and turns? Yes. Most of the time spent in a courtroom? Not even close...the setting and circumstances made me feel as if I have seen a glimpse of what it was like in Bosnia during the war."—The Free Lance-Star

"TESTIMONY shows the great human toll when an entire section of the world descends into chaos...this novel is a legal thriller on a grand stage...Turow's descriptions of the causes and aftermath of the Bosnian war are both substantive and compassionate...sheds an unwavering light on the devastating human toll and the still-reverberating political aftershocks."—The ARTery, WBUR

"Scott Turow's new novel is the dedicated fiction-reader's version of El Dorado: a driving, unputdownable courtroom drama/murder mystery that is also a literary treasure, written in language that sparkles with clarity and resonates with honest character insight. I came away feeling amazed and fulfilled, as we only do when we read novelists at the height of their powers. Put this one on your don't-miss list." (Praise for Innocent)—Stephen King

Scott Turow is the author of eleven bestselling works of fiction, including Identical, Innocent, Presumed Innocent, and The Burden of Proof, and two nonfiction books, including One L, about his experience as a law student. His books have been translated into more than forty languages, sold more than thirty million copies worldwide, and have been adapted into movies and television projects. He has frequently contributed essays and op-ed pieces to publications such as the New York Times, Washington Post, Vanity Fair, the New Yorker, and the Atlantic.
Loading...
or support indie stores by buying on