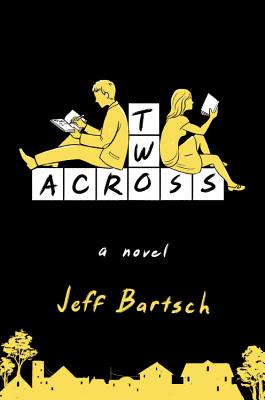 Praise For Two Across…

"A crossword creator and con man eludes the woman who loves him, until he realizes his error. . . . Stanley is a character Wes Anderson would love. . . . [TWO ACROSS] moves at a nice clip, aided by the regular appearance of the cleverly coded puzzles Stanley and Vera plant for each other in various newspapers. Crossword enthusiasts will appreciate the many insider winks, but everyone will be eager to solve the book's biggest puzzle: whether Stanley and Vera will succeed in their search for happiness."
—The New York Times Book Review

"TWO ACROSS is an excellent title for a book that revolves around crosswords, cross-purposes and a couple stumped by love. Bartsch doggedly works his themes: secrets, deceptions and fraud versus honesty and true love. His tightly constructed book is crammed with jabs at politicians, entitled rich people, workaholics, businessmen who profit by purveying junk, and college students too lazy or dumb to do their own work... TWO ACROSS spells out a charming love story in crosswords."
—Heller McAlpin, NPR.org

"This nerd-meets-nerd love story reflects the complexity and depth of human relations. Not for fans of easy-flowing romances; this is full of struggles, melancholy, heartbreak, and introspection. It makes a wonderful book club read: the trials of Vera and Stanley are well worth plumbing for dynamic discussion."
—Library Journal (starred review)

"Smart and sprightly . . . readers will root for Vera and Stanley, who are uncommonly agreeable characters. . . . Reader, can you spell romantic comedy? Clearly, Bartsch can and does to wonderfully good effect."—Booklist

"Two Across, the debut novel from Jeff Bartsch, follows the developing relationship of two young people from their school days far into adulthood. As Bartsch unravels Stanley's charades and how they affect people around him, he weaves in enough crossword clues to keep any puzzle fans curious . . . Entertaining . . . . the end result of Two Across is an examination of a relationship's points of intersection and the clues that lead us back to ourselves."—BookPage

"I fell in love with TWO ACROSS twenty seconds into the first page, and I swear-with my right hand raised and my left on a Jane Austen novel-that with this book you'll meet your new favorite author. His warmth and wit remind me of Laurie Colwin and the other best practitioners of smart romantic comedy. I wish I'd written this wonderful novel. Well, first I'd have to be as good as Jeff Bartsch."
—Elinor Lipman, author of The View from Penthouse B and The Inn at Lake Devine

'What a quirky, witty, wonderful read. I ignored my family for the better part of a beach vacation because I couldn't bear to put down this gem of a book. Jeff Bartsch is an immensely talented writer, and I plan to be first in line to buy whatever it is he publishes next."
—Cristina Alger, author of The Darlings

Jeff Bartsch is an award-winning copywriter who has worked on campaigns for many major brands, received the D&D Young Guns Award, and been featured twice in Adweek's Spot of the Week. He studied creative writing at the University of Wisconsin, and held the Katey Lehman Fellowship in the MFA program at Penn State University. He lives in New York.
Loading...
or
Not Currently Available for Direct Purchase