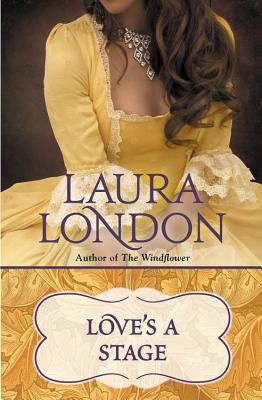 From the author of the beloved romance classic The Windflower comes a novel of drama, danger, and desire in the cutthroat world of the London theater.

From the moment she arrives in the big city, Miss Frances Atherton finds herself in the most treacherous of scenarios-until a golden-haired stranger comes to her rescue. The dashing Mr. David is as handsome and heroic as any leading man in a play. He is also, she learns, one of the most notorious rakes in London. A rake with a secret as shocking and dramatic as her own . . .

Frances is a country parson's daughter pretending to be an actress. Her plan is to unmask the infamous Blue Specter, a smuggler who framed her father and hides among the actors, thieves, and ne'er-do-wells of Drury Lane. The plot thickens when David is revealed to be Lord Landry-the most renowned playwright of the day. If all the world's a stage, Frances and David are just the players to expose the Specter's crimes. But how long can they hide their growing attraction . . . when their hearts and their lives are in very real danger?

Laura London is the pen name for the husband and wife writing team Tom and Sharon Curtis. Married more than forty years, Tom and Sharon published ten historical and contemporary romance novels from 1976 to 1986, many of which have come to be regarded as classics in the genre. The Windflower is in numerous top 100 lists of best romances of the twentieth century, including Goodreads, The Romance Reader, All About Romance, and Dear Author. Tom and Sharon have been featured on both The Today Show and Good Morning America.

The daughter of a petroleum geologist father and historian and magazine editor mother, Sharon was raised overseas and lived in Saudi Arabia, Pakistan, the Canary Islands, Turkey and Iran, and attended high school in London. As an adult, she worked in bookstore management.

Tom attended the University of Wisconsin in Madison and has worked for a public television station as a writer and on-air reporter. He is currently employed as a semi truck driver for a chemical company and plays guitar with a Celtic band that includes a son on bodhran and a daughter on fiddle. Together they have played eighteen years of annual performances at the largest Irish musical festival in the world.

Find out the latest at www.facebook.com/lauralondonauthor.
Loading...
or support indie stores by buying on