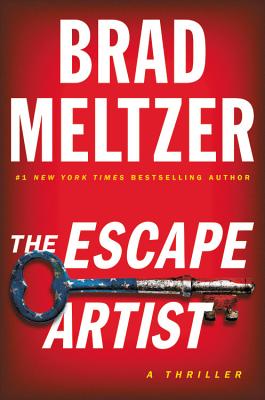 The Escape Artist (Zig and Nola #1)

Praise For The Escape Artist (Zig and Nola #1)…

"This novel is like a launched torpedo slashing through 400 pages of deep water before reaching impact. Enjoy one of the best thriller rides ever."—David Baldacci

"THE ESCAPE ARTIST is Brad Meltzer's best book in years... Meltzer weaves a stellar tale of history, government-insider knowledge, and thrills... the rare novel that one wants to read fast while also needing to go slow to savor every word."—Jeff Ayers, Associated Press

"Brad Meltzer has done it again! THE ESCAPE ARTIST is an exciting, cutting-edge thriller you will not be able to put down. If you love twists, tension, and tons of amazing characters, treat yourself to this gripping tale by one of the absolute best in the business."—Brad Thor

"Meltzer is a master and this is his best. Not since The Girl with the Dragon Tattoo have you seen a character like this. Get ready to meet Nola. If you've never tried Meltzer, this is the one."—Harlan Coben

"THE ESCAPE ARTIST is a slingshot of a novel. Brad Meltzer expertly pulls it back and lets it go, propelling the unlikeliest of heroes forward in a high stakes, high tension thriller that never lets you catch your breath. My advice: Buckle up!"—Michael Connelly

"A throat-clenching masterpiece of suspense-and damned ingenious to boot. My jaw dropped once more--and so will yours."—James Rollins

"Meltzer has based his literary career on conspiracy-themed stories, and he's very good at them. In Nola and Zig, too, he's created two of his most compellingly fresh characters. Nola, in particular, represents a high point in the author's career: a strong, resourceful, mysterious female lead who could go toe-to-toe with Jack Reacher, Bob Lee Swagger, and the other guys. First of a new series, according to the publisher, and that's just fine."