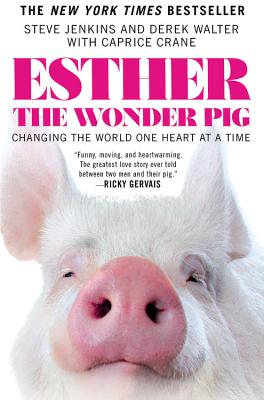 Changing the World One Heart at a Time

Unlikely pig owners Steve and Derek got a whole lot more than they bargained for when the designer micro piglet they adopted turned out to be a full-sized 600-pound sow! This funny, inspirational story shows how families really do come in all shapes and sizes.

In the summer of 2012, Steve Jenkins was contacted by an old friend about adopting a micro piglet. Though he knew his partner Derek wouldn't be enthusiastic, he agreed to take the adorable little pig anyway, thinking he could care for her himself. Little did he know, that decision would change his and Derek's lives forever.

It turned out there was nothing "micro" about Esther, and Steve and Derek had actually signed on to raise a full-sized commercial pig. Within three years, Tiny Esther grew to a whopping 600 pounds. After some real growing pains and a lot of pig-sized messes, it became clear that Esther needed much more space, so Steve and Derek made another life-changing decision: they bought a farm and opened the Happily Ever Esther Farm Sanctuary, where they could care for Esther and other animals in need.

Caprice Crane is an award-winning, internationally bestselling, five-time novelist, screenwriter, and television writer, and has the distinction of being one of Huffington Post's "50 Funny People You Should Be Following on Twitter." Her debut novel Stupid and Contagious (published in fourteen countries), and her international bestselling Forget About It won the RT Reviews Choice Award in 2006 and 2007 consecutively. She has since published three more novels to critical acclaim.

Praise For Esther the Wonder Pig: Changing the World One Heart at a Time…

"Funny, moving, and heartwarming. The greatest love story ever told between two men and their pig. "—Ricky Gervais

"Told with self-effacing humor and a sense of wonder at what life can bring, ESTHER is the story of the transformative power of love between people and animals and how the decision to try to make a difference on a personal level can effect positive change far beyond anything that might have been imagined."—Larry Levin, New York Times bestselling author of Oogy: The Dog Only a Family Could Love

"First, Jenkins and Walter opened their hearts to one very special pig, and now they are opening their doors and letting us in, too. ESTHER THE WONDER PIG is a tender, funny story that manages to sneak up behind you when you're least expecting it and change your life. Be prepared to fall in love-with a pig."—Jasmin Singer, author of Always Too Much and Never Enough: A Memoir and co-host of Our Hen House

"Steve and Derek show us what we already know at Mercy for Animals-that farmed animals are just as deserving of love and respect as the dogs and cats we share our home with-or, in their case, the pig they share their home with."—Nathan Runkle, founder & president, Mercy for Animals

"Written in a sincere, touching, and often quite funny voice, ESTHER THE WONDER PIG is a balm to the soul . . .So far, definitely my favorite read of 2016."—Have Cake, Will Travel

"Funny, entertaining, enlightening, and touching, this book about an unknowingly influential little piggy is a good read that also provides an education on the intelligence of pigs and their capacity for giving and receiving affection."—Publishers Weekly (STARRED REVIEW)

"There's joy and humor on every page."—VeganOutreach.org
or
Not Currently Available for Direct Purchase
Copyright © 2020 American Booksellers Association