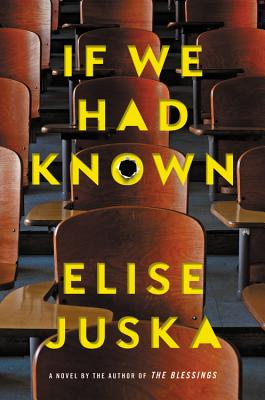 If We Had Known

A literary tour de force from the acclaimed author of The Blessings-a riveting novel about one of the most urgent crises of our time.

One August afternoon, as single mother Maggie Daley prepares to send her only child off to college, their world is shattered by news of a mass shooting at the local mall in rural Maine. As reports and updates about the tragedy begin to roll in, Maggie, an English professor, is further stunned to learn that the gunman had been a student of hers: Nathan Dugan was an awkward, complicated young man whose quiet presence in her classroom had faded from her memory-but not, it seems, the memories of his classmates.

When a viral blog post hints at the existence of a dark, violence-tinged essay Nathan had written during Maggie's freshman comp seminar, Maggie soon finds herself at the center of a heated national controversy. Could the overlooked essay have offered critical red flags that might have warned of, or even prevented, the murders to come? As the media storm grows around her, Maggie makes a series of desperate choices that threaten to destroy not just the personal and professional lives she's worked so hard to build, but-more important-the happiness and safety of her sensitive daughter, Anna.

Engrossing and provocative, combining sharp plot twists with Juska's award-winning, trademark literary sophistication, If We Had Known is at once an unforgettable mother-daughter journey, an exquisite portrait of a community in turmoil, and a harrowing examination of ethical and moral responsibility in a dangerously interconnected digital world.

Praise For If We Had Known…

"In elegant, gripping prose, If We Had Known offers a startling and empathetic look at the humanity behind the all-too-frequent headlines. Juska has produced that rarest and best kind of literature-a page-turner with a message and a heart."
—Darin Strauss, National Book Critics Circle Award-winning author of Half a Life

"What a gripping and wise book this is. Elise Juska's unparalleled ability to convey how a single tragic event reaches out to change the lives of many is on full and compelling display here. I love when I read a book like If We Had Known and discover my next go-to gift for all my favorite readers."
—Robin Black, author of Life Drawing

"[Juska] strikes a cozy tone that is the literary opposite of toxic masculinity...In our age of political rancor and tweet storms befitting our state of emergency, there is something radical about a take on the gun problem that concerns itself more with raising questions than ire."
—New York Times Book Review

"A tender, whip-smart meditation on the origins and aftermath of tragedy. Here Juska asks us an important and quietly devastating question: In what ways are we responsible to and for each other?"
—Carmen Maria Machado, author of the National Book Award Finalist Her Body and Other Parties

"Switching between viewpoints, Juska contrasts the actions of a split second and the slow burn of a lifetime of behavior to show that both can have extensive, damning consequences that are rarely foreseen."
—Booklist

"Captivates through the close and honest lens it places upon each of its characters."
—RT Book Review

"Juska's story nests in a thicket of current issues: social media, gun violence, teenage anxiety and anorexia, and the responsibility of academics with regard to troubled students. Well-written, realistic, and suspenseful to the point of dread."
—Kirkus Reviews

"Juska's compelling narrative tackles complex issues about society's judgment of and responsibility for others. Can we accurately predict violent acts? Who is responsible for intervening?"
—Shelf Awareness

"An incident as timely as the day's headlines-a mall shooting that leaves five dead, including the gunman-catalyzes the plot of this compassionate, searching novel....Moving and memorable in its portrayal of people unexpectedly involved in devastating events."—Publisher's Weekly

"A literary tour de force...a riveting new novel about one of the most urgent crisis of our time....Engrossing and provocative, combining sharp plot twists with Juska's award-winning, trademark literary sophistication, If We Had Known is at once an unforgettable mother-daughter journey, an exquisite portrait of a community in turmoil, and a harrowing examination of ethical and moral responsibility in a dangerously interconnected digital world."—Book Bub

"Highly readable... Juska constructs "If We Had Known" with intelligence [and] sensitivity...digging deep into her characterizations and settings. Juska also critiques the lure of social media, clearly and smartly depicting its potential for unthinking destructiveness."
—Portland Press Herald

"This brilliantly-written novel is a great read for those who look for good fiction built around serious issues."—-

"Juska explores the aftermath of a violent event in a story that successfully speaks to issues of gun violence, the rise of anxiety in young people, the use and abuse of social media, and the role of educators today, capturing human vulnerability and the impact of tragedy on survivors. Recommended."
—Library Journal

Elise Juska's fiction and nonfiction have appeared in Ploughshares, Gettysburg Review, The Missouri Review, Good Housekeeping, the Hudson Review, and many other publications. She is the recipient of the Alice Hoffman Prize for Fiction from Ploughshares and her work has been cited in the Best American Short Stories. She lives in Philadelphia, where she is the director of the undergraduate creative writing program at the University of the Arts.
Loading...
or
Not Currently Available for Direct Purchase