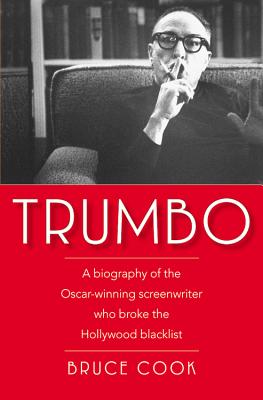 Dalton Trumbo was the central figure in the "Hollywood Ten," the blacklisted and jailed screenwriters. One of several hundred writers, directors, producers, and actors who were deprived of the opportunity to work in the motion picture industry from 1947 to 1960, he was the first to see his name on the screen again. When that happened, it was Exodus, one of the year's biggest movies.
This intriguing biography shows that all his life Trumbo was a radical of the homegrown, independent variety. From his early days in Colorado, where his grandfather was a county sheriff, to Los Angeles, where he organized a bakery strike, to bootlegging, to Hollywood, where he was the highest-paid screenwriter when he was blacklisted (and a man with constant money problems), his life rivaled anything he had written.

Under both names Cook wrote a total of 23 books, both fiction and nonfiction; they include a crime fiction series featuring Los Angeles private detective Chico Cervantes. Cook's last completed novel, Young Will: The Confessions of William Shakespeare, was published posthumously. Born in Chicago, Bruce Cook lived in Los Angeles and Paris with his wife, the violinist Judith Aller.

"Let me end by again stressing how wonderful this book is. If you have any interest in Hollywood history, the postwar communist witch hunts, screenwriting or the art of biography, you should grab this new paperback of TRUMBO."—The Washington Post

"TRUMBO the biography, is fascinating... The book, first published in 1977, is a great example of how a biographer can take readers by the hand and lead them on a journey through the subject's life."—The Oregonian

"One of the great strengths of this biography is its sense of immediacy... I highly recommend this book to anyone wanting to shine a light onto a dark period of American history."—Huffington Post
or support indie stores by buying on
(This book is on backorder)
Copyright © 2020 American Booksellers Association