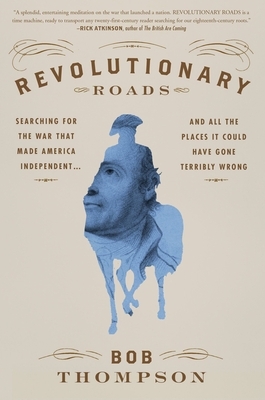 REVOLUTIONARY ROADS takes readers on a time-traveling adventure through the crucial places American independence was won and might have been lost. You’ll ride shotgun with Bob Thompson as he puts more than 20,000 miles on his car, not to mention his legs; walks history-shaping battlefields from Georgia to Quebec; and hangs out with passionate lovers of revolutionary history whose vivid storytelling and deep knowledge of their subject enrich his own. Braiding these elements together into a wonderfully entertaining whole – and with a reporter’s abiding concern for getting the story straight – he has written an American Revolution book like no other.

The Revolutionary War is one of the greatest stories in all history, an eight-year epic filled with self-sacrificing heroes, self-interested villains, and, more interestingly, all the shades of complex humanity in between. It boasts large-scale gambles that sometimes paid off but usually didn’t, as well as countless tiny, fraught tipping points like a misunderstood order in a South Carolina cow pasture that could have altered the course of the war. The drama is magnified when you consider what was at stake: the fate of a social and political experiment that would transform the world. Yet we don’t know this story as well as we should, or how easily the ending could have changed.

Praise For Revolutionary Roads: Searching for the War That Made America Independent...and All the Places It Could Have Gone Terribly Wrong…

"A splendid, entertaining meditation on the war that launched a nation. REVOLUTIONARY ROADS is a time machine, ready to transport any 21st century reader searching for our 18th century roots."—Rick Atkinson, author of The British Are Coming

"REVOLUTIONARY ROADS is a superb book and a flat-out joy to read. It’s poignant, it’s funny, and it’s filled with surprising details about the lucky breaks and haunting decisions of the war that created America. Best of all is the enthusiasm Bob Thompson brings to the story. If you’re at all curious about the American Revolution–and we all should be, especially at this point in history–you couldn’t ask for a better guide and companion."—David Finkel, author of The Good Soldiers and Thank You For Your Service

"Bob Thompson’s tour through key Revolutionary War sites is a riveting reading adventure. The chapters vibrate with fresh insight into the trials and travails of people from a mix of backgrounds who fought for and against American independence. With unrestrained enthusiasm, I recommend REVOLUTIONARY ROADS as a well-written, innovative, fascinating new addition to our continuing study of the American experience."—James Kirby Martin, co-author of the classic volume, A Respectable Army: The Military Origins of the Republic, 1763-1789

"In this beguiling, disarming book, Bob Thompson chips away at the cluttered present to bring us face to face with the personalities and events of our founding conflict. His account is greatly enhanced and humanized by the fact that he’s not a historian, not an expert. He’s one of us, learning as he goes, encountering the past with such wit and curiosity that he makes his discoveries our own."—Stephen Harrigan, author of Gates of the Alamo and Big Wonderful Thing: A History of Texas

"Bob Thompson takes us on a literal road trip through the War for Independence—20,000 miles of visits to all manner of historic sites and events, plus conversations with knowledgeable history lovers of all descriptions. The result is a marvelous book filled with always entertaining, often poignant observations on the nature of America’s founding struggle. Thompson has a keen eye for pivotal moments when confusion, blunders, misunderstandings, and just plain happenstance could have taken the war in unexpected directions. The writing sparkles, capturing the essence of the epoch’s personalities and reminding us to consider events from the perspective of those who lived through them—often with little idea how their futures would unfold. Once you’ve opened REVOLUTIONARY ROADS you won’t want to put down. It’s that good."—Mark Edward Lender, author of Cabal! The Plot against General Washington

"Victory in the War of Independence was never inevitable. In REVOLUTIONARY ROADS, Bob Thompson uses the power of place to drive home that vital fact, immersing us in the midst of some of the war's most crucial turning points."—Edward G. Lengel, Ph.D, Chief Historian, National Medal of Honor Museum

"So many people don’t appreciate history anymore because they find the telling of it dry and uninteresting. Bob Thompson’s engaging writing style and gift for insightful analysis are a definite remedy for that. With a combination of solid historical research and good storytelling, Thompson brings life to the important figures and events of the American Revolutionary War."—Carl Borick, Director of the Charleston Museum and author of A Gallant Defense: The Siege of Charleston, 1780

Bob Thompson is the author of Born on a Mountaintop, an on-the-road exploration of the real and legendary Davy Crockett. As a longtime feature writer for the Washington Post and the editor of its Sunday magazine, he was known for his pieces on the intersection of history and myth.
Loading...
or support indie stores by buying on