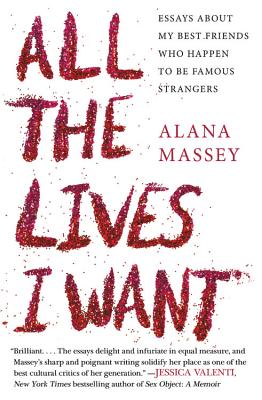 All the Lives I Want

Essays About My Best Friends Who Happen to Be Famous Strangers

"Alana Massey's prose is to brutal honesty what a mandolin is to a butter knife: she's sharper; she slices thinner; she shows the cross-section of a truth so deftly--so powerfully and cannily--it's hard to look away, and hard not to feel that something has shifted in you for having read her." -- Leslie Jamison, New York Times bestselling author of The Empathy Exams From columnist and critic Alana Massey, a collection of essays examining the intersection of the personal with pop culture through the lives of pivotal female figures--from Sylvia Plath to Britney Spears--in the spirit of Chuck Klosterman, with the heart of a true fan. Mixing Didion's affected cool with moments of giddy celebrity worship, Massey examines the lives of the women who reflect our greatest aspirations and darkest fears back onto us. These essays are personal without being confessional and clever in a way that invites readers into the joke. A cultural critique and a finely wrought fan letter, interwoven with stories that are achingly personal, All the Lives I Want is also an exploration of mental illness, the sex industry, and the dangers of loving too hard. But it is, above all, a paean to the celebrities who have shaped a generation of women--from Scarlett Johansson to Amber Rose, Lil' Kim, Anjelica Huston, Lana Del Rey, Anna Nicole Smith and many more. These reflections aim to reimagine these women's legacies, and in the process, teach us new ways of forgiving ourselves.

Praise For All the Lives I Want: Essays About My Best Friends Who Happen to Be Famous Strangers…

"ALL THE LIVES I WANT is a brilliant collection on the things women think but do not say. The essays delight and infuriate in equal measure, and Massey's sharp and poignant writing solidify her place as one of the best cultural critics of her generation."
—Jessica Valenti, New York Times bestselling author of Sex Object: A Memoir

"Alana Massey's writing often makes me uncomfortable, and sometimes makes me feel like resisting--but it also makes me laugh, and always makes me think, and always--certainly--makes me feel. Her prose is to brutal honesty what a mandolin is to a butter knife: she's sharper; she slices thinner; she shows the cross-section of a truth so deftly--so powerfully and cannily--it's hard to look away, and hard not to feel that something has shifted in you for having read her."
—Leslie Jamison, New York Times bestselling author of The Empathy Exams

"Brilliant and tender where you want it to be, incisive and damning where you need it to be, ALL THE LIVES I WANT gives us the chance to reconsider how we've absorbed the public lives of women so that we may ask new questions about how we live our own."
—Mychal Denzel Smith, New York Times bestselling author of Invisible Man, Got the Whole World Watching

"With brutal honesty, sly wit, and natural suspicion toward our most commonly held cultural assumptions, Alana Massey renders each and every subject she lands on a million times more interesting. From Sylvia Plath to Princess Diana, Fiona Apple to Amber Rose, Massey examines the most complicated and confusing female celebrities to shape the modern psyche, gracefully reflecting our shared sympathies, blind spots, and vulnerabilities along the way."
—Heather Havrilesky, author of How to Be a Person in the World

"Alana Massey's book is a diamond, in both the glitter of its prose and its capacity to cut through inferior things. This is a manual for survival disguised as culture writing. A stunning and necessary book."
—Molly Crabapple, author of Drawing Blood

"Through the prism of female icons and celebrities, both deified and demonized ALL THE LIVES I WANT offers a poignant and often hilarious dissection of how pop culture shapes and consumes the women it elevates. Embedded in personal anecdote, Massey draws vital attention to, and urges celebration of, (the overlooked) sites of resistance therein. Massey's work, with prose both poignant and acerbic, is an invocation towards empathy-a call to women to be generous with ourselves and each other. We do ourselves a great favor to listen to her."
—Natasha Lennard, columnist and contributor at The New York Times, The Nation, The Intercept, and Fusion

"Finely wrought . . . Massey is best when she pinpoints the particular viscousness of living under patriarchy."
—New York Times Book Review

"At times funny and refreshing, other times honest to the point of cruelty, but always genuine in her words, Massey's prose drips with passion and flare... A collection that celebrates and critiques the lives of everyone from Britney Spears to Courtney Love to Massey herself, ALL THE LIVES I WANT is a sharp, insightful, and hypnotizing debut..."
—Bustle.com

"Together the chapters add up to more than a lived trajectory: They are an argument for girls' complicated selfhood and underrated power, an examination of the ways in which female celebrities have been misrepresented and reclaimed... Massey seems to aspire to a kind of complicated soulfulness. Her prose is measured and cool."
—Slate.com

"Alana Massey is rightfully hailed as one of the sharpest voices today. When she's writing about women and pop culture, there's no one I'd rather read."
—New York Observer

"Searingly insightful reminders of shared experience-- humor-filled rafts of humanity in a sea of contemporary TMZ and Trump-fueled despair. Massey's prose captures barely perceptible nuances of feeling we have all felt and holds them up to hilarious effect--all while discussing Daily Mail headlines and Gwyneth Paltrow's kids' multilingual tutors."—i-D Magazine

"Though Massey discusses celebrities she doesn't personally know, she writes about them with intimacy, drawing connections between their lives and her own... this book reminds readers how celebrities' seemingly dazzling lives can provide insight into their own."
—Publisher's Weekly

"Massey engages lovingly but thoughtfully with the lives and work of her subjects, and she offers herself the same even-handed treatment. As she writes her own feminist canon, she insists on the veracity and value of her own presence and voice: Courtney Love and the Olsen twins and Britney Spears, imperfect and compelling, belong in books-which means that Alana Massey does, too."
—New Republic

"[Massey] has a seemingly uncanny ability to perceive things in a way that goes far beyond what's visible on the surface, and then, through her writing, transform the way others see them as well, revealing truths and offering insights not only into the lives of others but also, of course, about our own."
—Nylon.com

"For those who have fantasized about being BFFs with all their favorite celebrities, you have to read Alana Massey's incredibly smart book analyzing the way society lifts and destroys famous women."
—Cosmopolitan

"A beautifully articulated, personal collection of cultural criticisms . . . All The Lives I Want is the book we want to be dissecting with all our girlfriends in the months to come."—Refinery29.com

"Massey's collection of essays strikes a nerve with her poignant and grittier form of celebrity worship... enlightening and powerful."
—Library Journal

"Massey traverses the corners of the internet that are home to Plath-esque female melancholy, resuscitating girlishness and female pain as objects worthy of study in their own right. She reminds us that girls' expansive documentation of their own vulnerability is fundamentally a project of making meaning of their (our) lives. She insists we bear witness."
—Feministing.com

Signed with Grand Central Publishing since June of 2015, Alana Massey is a writer whose work covers culture, labor, identity, and mortality. The popularity and substance of her writing has earned her the attention of publications like The Awl, The Columbia Journalism Review, and Forbes, who have all published profiles of the author. Massey counts authors like Leslie Jamison, Molly Crabapple, Heather Havrilesky, and Rebecca Traister as admirers of her writing, in addition to her sizeable Twitter following that has tripled in size each of the last two years. Massey's essays, criticism, reviews, and reporting appear regularly in publications like The Guardian, New York Magazine, Elle, The Atlantic, Hazlitt, Buzzfeed, and more.
Loading...
or
Not Currently Available for Direct Purchase