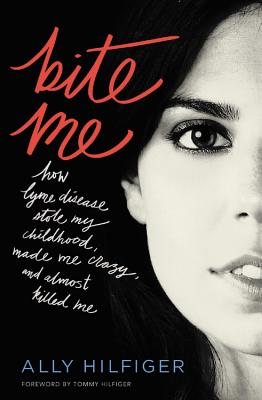 How Lyme Disease Stole My Childhood, Made Me Crazy, and Almost Killed Me

Ally was at a breaking point when she woke up in a psych ward at the age of eighteen. She couldn't put a sentence together, let alone take a shower, eat a meal, or pick up a phone. What had gone wrong? In recent years, she had produced a feature film, a popular reality show for a major network, and had acted in an off-Broadway play. But now, Ally was pushed to a psychotic break after struggling since she was seven years old with physical symptoms that no doctor could explain; everything from joint pain, to night sweats, memory loss, nausea, and brain fog. A doctor in the psych ward was finally able to give her the answers her and her family had desperately been searching for, and the diagnosis that all the previous doctors had missed. She learned that she had Lyme disease-and finally had a breakthrough.

What she didn't know was that this diagnosis would lead her down some of the most excruciating years of her life before beginning her journey to recovery from eleven years of misdiagnosis and physical pain. She would need to find her courage to heal physically, mentally, and emotionally, and become the survivor she is today.

Set against the backdrop of the fast-paced fashion and entertainment industries, Bite Me shares the heartbreaking and hilarious stories that moved Ally forward on her journey from sickness to health. Its themes will be familiar to more than 300,000 Americans diagnosed with Lyme disease each year, many of whom, like Ally, wondered for years what was wrong with them. Bite Me offers readers hope and ideas for how one can transition from victim to survivor, and shares the spiritual principles and actions that have contributed to her wholeness as a human, mother, and international spokesperson against Lyme disease.

Praise For Bite Me: How Lyme Disease Stole My Childhood, Made Me Crazy, and Almost Killed Me…

BITE ME is a must-read. It is riveting, personal, and well written. Its spiritual message is powerful and inspirational. With love all things are possible.—Russell Simmons

BITE ME is captivating. Ally recounts her experience battling misdiagnosis and a debilitating tormentor with a humor and power that can inspire us all. She gives a voice to others who are struggling.—Georgia May Jagger

Reading Ally's struggle of dealing with the debilitating effects of Lyme disease is a total inspiration. Her cheerful strength of will and determination to rise above the exhausting days of not knowing the way out proves once again that the human spirit can prevail in the most strenuous of circumstances.—Bryan Adams

This book will be very important at a time that Lyme disease meets NIH's eight characteristics of a worldwide pandemic. Thank you, sweet Ally, for daring to share your inspiring journey of strength, hope, and everyday determination to get well.—Yolanda Foster

BITE ME is humorous and suspenseful, and it holds your attention to the very last page. This is a story that will inspire you—Tommy Mottola

A fascinating look at a disease that is often misdiagnosed and costs many people their sanity and lives. BITE ME is a story of courage. I highly recommend it.—Thalia Mottola

Ally Hilfiger is a producer, actress, artist,fashion designer, writer, and Lyme disease survivor. As a producer, she created and starred in Rich Girls for MTV, produced the feature film Proud, and was featured in Scatter My Ashes at Bergdorf's and the documentary Dressed. As a designer, she spearheaded the women's clothing line NAHM. Ally is the daughter of fashion mogul and entrepreneur Tommy Hilfiger and sits on the board of the Global Lyme Alliance. She currently lives in Los Angeles.
Loading...
or
Not Currently Available for Direct Purchase