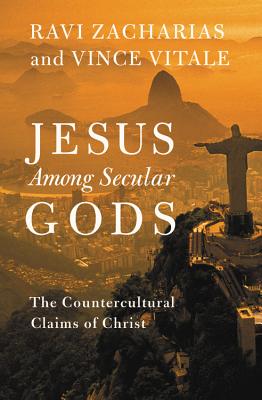 The Countercultural Claims of Christ

Ravi Zacharias and Vince Vitale defend the absolute claims of Christ against modern belief in the "secular gods" of atheism, scientism, relativism, and more.

The rise of these secular gods presents the most serious challenge to the absolute claims of Christ since the founding of Christianity itself. The Christian worldview has not only been devalued and dismissed by modern culture, but its believers are openly ridiculed as irrelevant. In Jesus Among Secular Gods, Ravi Zacharias and Vince Vitale challenge the popular "isms" of the day, skillfully pointing out the fallacies in their claims and presenting compelling evidence for revealed absolute truth as found in Jesus. This book is fresh, insightful, and important, and faces head on today's most urgent challenges to Christian faith. It will help seekers to explore the claims of Christ and will provide Christians with the knowledge to articulate why they believe that Jesus stands tall above all other gods.

Praise For Jesus Among Secular Gods: The Countercultural Claims of Christ…

Ravi Zacharias and Vince Vitale take a big topic--"The Secular"--and break it into digestable parts. They provide analysis and critique of the various "isms" of our culture in ways that are respectful, readable, and compelling. Though it is based on great learning and extensive research, every chapter is nonetheless highly accessible. It will serve many audiences very well.
—Tim Keller, Redeemer Presbyterian Church, New York City

Ravi Zacharias is the Founder and President of Ravi Zacharias International Ministries, headquartered in Atlanta, Georgia, with additional offices in Canada, Hong Kong, India, Singapore, the United Kingdom, Austria, South Africa, Spain, and Turkey. Zacharias and his wife, Margie, have three grown children. He is the author of many books, including Can Man Live Without God and Why Jesus?

Dr. Vince Vitale is Director of the Zacharias Institute. He was educated at Princeton University and the University of Oxford, and later taught philosophy of religion as a faculty member at both universities. During his undergraduate studies at Princeton, Dr. Vitale took an unexpected journey that led him to God. Later, while at Oxford, he developed a new response the problem of evil. This response -- termed the Non-Identity Defense -- is discussed in his and Ravi Zacharias's previous book, Why Suffering? He is married to Jo, who also works for RZIM.
Loading...
or support indie stores by buying on