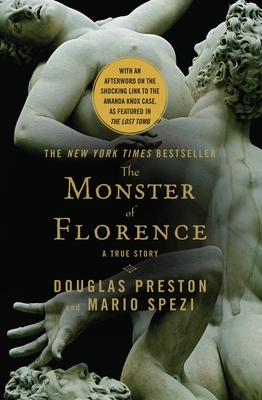 The Monster of Florence

In the nonfiction tradition of John Berendt and Erik Larson, the author of the #1 NYT bestseller The Lost City of the Monkey God presents a gripping account of crime and punishment in the lush hills surrounding Florence as he seeks to uncover one of the most infamous figures in Italian history.
In 2000, Douglas Preston fulfilled a dream to move his family to Italy. Then he discovered that the olive grove in front of their 14th century farmhouse had been the scene of the most infamous double-murders in Italian history, committed by a serial killer known as the Monster of Florence. Preston, intrigued, meets Italian investigative journalist Mario Spezi to learn more.
This is the true story of their search for--and identification of--the man they believe committed the crimes, and their chilling interview with him. And then, in a strange twist of fate, Preston and Spezi themselves become targets of the police investigation. Preston has his phone tapped, is interrogated, and told to leave the country. Spezi fares worse: he is thrown into Italy's grim Capanne prison, accused of being the Monster of Florence himself.
Like one of Preston's thrillers, The Monster of Florence, tells a remarkable and harrowing story involving murder, mutilation, and suicide-and at the center of it, Preston and Spezi, caught in a bizarre prosecutorial vendetta.

Praise For The Monster of Florence…

"A dark and fascinating descent into a landscape of horror that deserves to be shelved between In Cold Blood and Midnight in the Garden of Good and Evil."—Brad Thomas Parsons, Amazon's Best of the Month-June 2008

"This bit of real-life Florence bloodletting makes you sweat and think, and presses relentlessly on the nerves."—Publishers Weekly (starred review)

"The co-authors expertly and entertainingly guide the reader though an epic, colorful cast of characters and the stranger-than-fiction machinations of a Byzantine Italian judicial system."—Washington Post

"Preston's account of the crimes is lucid and mesmerizing."—TIME Magazine

"Remarkable true-crime story...passionately describes the investigations gone wrong....Preston knows how to load his storytelling with intriguing evidence and damning details. His feverish style keeps the reader turning with the hope of uncovering the killer's identity. In the book's most chilling moment, Preston and Spezi come face-to-face with their most likely suspect."—USA Today

"As taut and tense as any of the author's bestselling thrillers...fascinating, stomach-churning...nerve-tingling action and vivid writing...The Monster of Florence is a gripping tale, filled with shocking crimes, boldly drawn characters, and the careening suspense of the ultimate whodunit."—Dallas Morning News

"A dark and fascinating landscape of horror that deserves to the shelved between In Cold Blood and Midnight in the Garden of Good and Evil."—Bookviews101

"The writing is evocative, and the two collaborators skillfully weave the narratives back and forth to create, at times, a razor's edge of tension."—Chicago Tribune

"One of the best true-crime mysteries I've ever read... Nonfiction doesn't get any better than this."—Kansas City Star

"A most unconventional thriller, a real life murder mystery in which the authors become the suspects... Fascinating."—Associated Press

The thrillers of Douglas Preston and Lincoln Child "stand head and shoulders above their rivals" (Publishers Weekly). Preston and Child's famed Pendergast series includes the novels Relic and The Cabinet of Curiosities, both chosen by readers in a National Public Radio poll as being among the one hundred greatest thrillers ever written. Relic was also adapted into a number-one box office hit movie. In addition to his novels, Preston writes about archaeology for The New Yorker and Smithsonian magazines. Lincoln Child is a former book editor who has published five novels of his own, including the huge bestseller Deep Storm.

Readers can sign up for The Pendergast File, a monthly "strangely entertaining note" from the authors at their website www.PrestonChild.com. The authors welcome visitors to their alarmingly active Facebook page, where they post regularly.
Loading...
or support indie stores by buying on