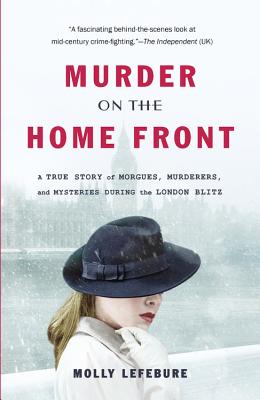 Murder on the Home Front

A True Story of Morgues, Murderers, and Mysteries during the London Blitz

It is 1941. While the "war of chaos" rages in the skies above London, an unending fight against violence, murder and the criminal underworld continues on the streets below.

One ordinary day, in an ordinary courtroom, forensic pathologist Dr. Keith Simpson asks a keen young journalist to be his secretary. Although the "horrors of secretarial work" don't appeal to Molly Lefebure, she's intrigued to know exactly what goes on behind a mortuary door.

Capable and curious, "Miss Molly" quickly becomes indispensible to Dr. Simpson as he meticulously pursues the truth. Accompanying him from somber morgues to London's most gruesome crime scenes, Molly observes and assists as he uncovers the dark secrets that all murder victims keep.

With a sharp sense of humor and a rebellious spirit, Molly tells her own remarkable true story here with warmth and wit, painting a vivid portrait of wartime London.

Praise For Murder on the Home Front: A True Story of Morgues, Murderers, and Mysteries during the London Blitz…

"[A] stunning memoir . . . . A former journalist, [Lefebure] evokes the physical and emotional terrain of crime scenes and the circumstances of death with adroit detachment, yet also authoritative depth . . . . She is such a wonderful, arch, thinking, intelligent guide to this strange underworld that you don't want Lefebure's wonderful tales to end. . . .[She] has bequeathed us a book which teaches so much about death-taking away much of the worst kind of fear and mystery around it, while reminding us that so much about it remains necessarily unknowable. It's a lesson imparted with the best kind of wry smile."—The Daily Beast

"Lefebure's narration provides a welcome alternative to wartime era tales; she's a young, single, professional woman, not a soldier or an evacuated Londoner. A sympathetic narrator and an engrossing read."—Historical Novel Society

"A secretary to a formidable London pathologist during World War II reissues her wry, grisly account of murder and corpses, first published in 1955. . . Lefebure's youthful bravery shines through, while the grim conditions showcase her terrific wit. Preserves like a frozen capsule the British grin-and-bear-it spirit and vocabulary of the WWII years."—Kirkus Reviews

"Gripping. . . like a pitch-dark version of Call the Midwife, dealing with the end of life rather than the beginning . . . Full of fascinating incidents, it is easy to see why this has been made into a drama by the creators of Downton Abbey. —Sunday Mirror (UK)

Molly Lefebure was secretary to acclaimed forensic pathologist Dr. Keith Simpson during the Second World War. Her memoir of her time at the Department of Forensic Medicine was originally published in 1955 as Evidence for the Crown. She went on to write children's books, a biography of Coleridge and several novels and became a fellow of the Royal Society of Literature before her death in 2013.
Loading...
or support indie stores by buying on