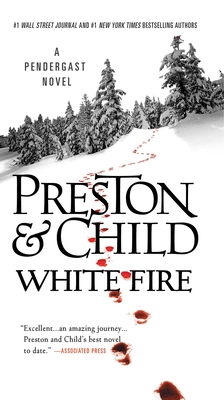 Past and present collide as Special Agent Pendergast uncovers a mysterious connection between a string of 19th century bear attacks in a Colorado mining town, a long-lost Sherlock Holmes story, and a deadly arsonist.
In 1876, in a mining camp called Roaring Fork in the Colorado Rockies, eleven miners were killed by a rogue grizzly bear. Corrie Swanson has arranged to examine the miners' remains. When she makes a shocking discovery, town leaders try to stop her from exposing their community's dark and bloody past.

"A mile-a-minute thriller with a deeply entertaining plot and marvelous characters, in a setting that will chill your blood, and not only because it's 10 degrees below zero and covered with snow. My copy is full of crumbs because I couldn't put it down long enough to eat."—Diana Gabaldon

"WHITE FIRE is as incandescent as its title, a beautifully organized, tautly paced book that really did just yank me in and demand that I keep reading. I'm very grateful for the experience."—Peter Straub

"This is no dream; it's the authors' best book in years. Pendergast has to rein in his feelings to pay attention to the details, and it's fun to see the role reversal between him and the usually emotional D'Agosta. Not to be missed by either newcomers or die-hard fans."—Library Journal (starred review) for Fever Dream