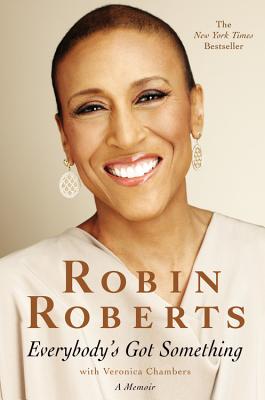 Everybody's Got Something (Hardcover)

Robin Roberts is the anchor of ABC's morning show Good Morning America. Under her leadership, the broadcast has won three consecutive Emmy Awards for Outstanding Morning program. Prior to that, Roberts was a contributor to ESPN. She is a native of Mississippi Gulf Coast and currently resides in New York City.

Veronica Chambers is a prolific author, best known for her critically acclaimed memoir, Mama's Girl, which has been course adopted by hundreds of high schools and colleges throughout the country. Her other nonfiction books include Kickboxing Geishas: How Japanese Women Are Changing Their Nation and The Joy of Doing Things Badly: A Girl's Guide to Love, Life and Foolish Bravery. She has also written more than a dozen books for children and spent two seasons as an executive story editor for the CW's hit series, Girlfriends. A graduate of Simon's Rock College at Bard, she lives with her husband and daughter in Hoboken, New Jersey.

Praise For Everybody's Got Something…

"Following her mother's time-honored advice to "make your mess your message," Roberts offers an inspiring memoir of her life, from her home base in Mississippi to her home in New York and the glamorous though grueling life of a television reporter...With the infectious personality for which she's known, Roberts details the support of family and friends and the people she's met in her life and career who've inspired her by overcoming their own challenges with the "something" that everybody inevitably faces."—Booklist