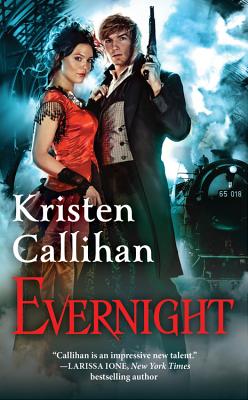 Will Thorne is living a nightmare, his sanity slowly being drained away by a force he can't control. His talents have made him the perfect assassin for hire. But as he loses his grip on reality, there is no calming him-until he finds his next target: the mysterious Holly Evernight.

Love must cast aside the shadows

Holly cannot fathom who would put a contract on her life, yet the moment she touches Will, the connection between them is elemental, undeniable-and she's the only one who can tame his bouts of madness. But other assassins are coming for Holly. Will must transform from killer to protector and find the man who wants Holly dead . . . or his only chance for redemption will be lost.

"Top Pick! 4 1/2 Stars! Callihan never disappoints or fails to surprise as she spins her tales of Darkest London. With extraordinary storytelling skills, mesmerizing characters and plots that twist and turn readers around and around, she delivers a remarkable non-stop read that sucks you in and doesn't let go. Here is a book you will think about, talk about and dream about for a long time."—RT Book Reviews

"Callihan's solid worldbuilding draws the reader into 1885 London from the first page, and her lyrical writing will have readers racing to the thrilling finish."—Publishers Weekly on Shadowdance

"Top Pick! 4 1/2 Stars! Like all good things, Callihan just keeps getting better and better. The third installment in the Darkest London series is not only a gripping novel, but also one that elevates the genre with its depth of emotion, passion and mesmerizing storytelling. Callihan doesn't just create worlds, she moves readers into them with unforgettable characters and stunning revelations. Once begun, it's impossible to put down WINTERBLAZE."—RT Book Reviews

"Top Pick! 4 1/2 Stars! Like moths to a flame, readers will be drawn to the flickering Firelight and get entangled in the first of the Dark London series. Combining Stephen King's Carrie and Beauty and the Beast, Callihan crafts a taut tale filled with sexual tension. This is one of the finest debuts of the season."
--- RT Book Reviews on Firelight