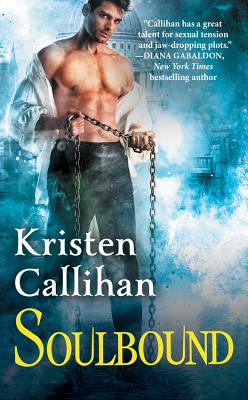 Once two souls are joined . . .
When Adam's soul mate rejected him, there was more at stake than his heart. After seven hundred years of searching, his true match would have ended the curse that keeps his spirit in chains. But beautiful, stubborn Eliza May fled-and now Adam is doomed to an eternity of anguish, his only hope for salvation gone . . .

Their hearts will beat together forever
No matter how devilishly irresistible Adam was, Eliza couldn't stand the thought of relinquishing her freedom forever. So she escaped. But she soon discovers she is being hunted-by someone far more dangerous. The only man who can help is the one man she vowed never to see again. Now Adam's kindness is an unexpected refuge, and Eliza finds that some vows are made to be broken . . .

USA Today bestselling author Kristen Callihan is a writer because there is nothing else she'd rather be. She is a three-time RITA nominee and winner of two RT Reviewers' Choice awards. Her novels have garnered starred reviews from Publishers Weekly and Library Journal, as well as being awarded top picks by many reviewers. Her debut book, Firelight, received RT Book Reviews' Seal of Excellence, was named a best book of the year by Library Journal, best book of Spring 2012 by Publishers Weekly, and was named the best romance book of 2012 by ALA RUSA. When she is not writing, she is reading.

"A tight plot and fascinating characters make Callihan's sixth Darkest London historical paranormal her best to date. It's easy to get delightfully lost in Callihan's story; her masterly prose immediately pulls the reader into the deeply detailed universe she's created. Callihan ably lays the groundwork for the next installment, which readers will hungrily await."—Publishers Weekly, starred review

"Top Pick! 4 1/2 Stars! Another unique, gripping read. Just when you think you know what's coming next, she throws a curveball, leaving readers enraptured with the story."—RT Book Reviews

"Top Pick! 4 1/2 Stars! Callihan never disappoints or fails to surprise as she spins her tales of Darkest London. With extraordinary storytelling skills, mesmerizing characters and plots that twist and turn readers around and around, she delivers a remarkable non-stop read that sucks you in and doesn't let go. Here is a book you will think about, talk about and dream about for a long time."—RT Book Reviews on Evernight

"Top Pick! 4 1/2 Stars! Like all good things, Callihan just keeps getting better and better. ... Once begun, it's impossible to put down Winterblaze."—RT Book Reviews