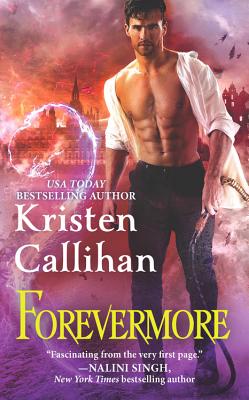 Isolated and alone, Sin Evernight is one of the most powerful supernatural creatures in heaven and on earth. As an angel of vengeance, he hunts down the darkest evil, but when his long-lost friend, Layla Starling, needs him, he vows to become her protector. Even though she will be horrified by the man he has become.

Now a famous singer and the toast of London, Layla believes that Sin is only here to guard her from rabid fans and ardent suitors. However, the truth is far more sinister. Desperate to avoid losing Layla a second time, Sin will face a test of all his powers to defeat an unstoppable foe - and win an eternity with the woman he loves.

"The emotional impact in FOREVERMORE is just as explosive as the supernatural action elements. Kristen Callihan cleverly navigates the intricate relationships and paranormal hierarchy she's created in this Darkest London world to create a thrilling story and divine romance. FOREVERMORE is a triumph of paranormal curiosities and delights, as well as a sensual romance on a grand scale. Kristen Callihan does a superb job of tying up loose ends in FOREVERMORE and giving the satisfying ending that these amazing characters deserve. Although I'm sad to see this series end, I can't wait to read the next Kristen Callihan book."—FreshFiction.com

"Top Pick! 4 1/2 Stars! Brilliantly crafted with a myriad of twists and turns and startling revelations readers won't see coming, this gripping tale is difficult to put down and even harder to forget, as readers become invested in the character's lives and conflicts. Like the rest of the series, this is a keeper."—RT Book Reviews

"This was my first Kristen Callihan book, but it will not be my last. Sin is a marvelously drawn, wounded warrior, and Callihan's plot brims with richness and depth."—Bookpage.com

"A satisfying conclusion to an unforgettable paranormal series."—Library Journal