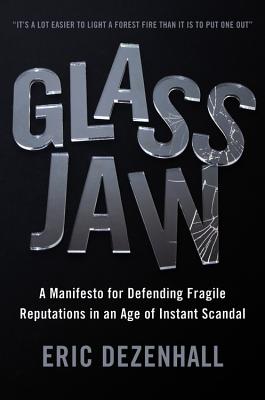 In an age when scandal can destroy a company's brand or anyone's reputation in an instant-GLASS JAW is an Art of War guide to modern crisis management.

In boxing terms, a tough-looking fighter who can't take a punch is said to have a "glass jaw," and so it is these days with targets of controversy. Down the rabbit hole of scandal, the weak are strong and the strong are weak. Just consider this slate of recent reputational body blows: Toyota, Susan G. Komen, Paula Deen, Tiger Woods, Joe Paterno, BP, the Duke Lacrosse players, Lance Armstrong, and Anthony Weiner. GLASS JAW is a manifesto for these times, written by crisis management veteran Eric Dezenhall, who has spent three decades dealing with some of the most intense controversies, both known and . . . handled with discretion.

In the current digital age, the fundamental nature of controversy is viral, rendering once-mighty organizations and individuals powerless against scandal. In GLASS JAW, Dezenhall analyzes scandal and demystifies the paper tiger "spin" industry, offering lessons, corrective measures, and counterintuitive insights, such as:

From the boardroom to the parenting messaging board, scandals erupt every day. GLASS JAW explains this changing nature of controversy and offers readers counterpunches to best protect themselves.

Eric is the author of nine books, including three non-fiction texts on crisis communications and corporate witch hunts, entitled Damage Control: How to Get the Upper Hand When Your Business is Under Attack (Portfolio, 2007) and Nail 'Em! Confronting High Profile Attacks on Celebrities and Businesses (Prometheus Books, 1999), both of which have been widely cited in business, media and academic circles. He is also the author of six novels: Money Wanders (St. Martin's, 2002), Jackie Disaster (Minotaur, 2003), Shakedown Beach (St. Martin's, 2004), Turnpike Flameout (St. Martin's, 2006) and Spinning Dixie (St. Martin's, 2007). His sixth novel, The Devil Himself (Thomas Dunne, St. Martin's, 2011), deals with the collaboration between the U.S. Navy and organized crime during World War II to secure American ports from Nazi attack.

As an investigative writer, Eric wrote articles about the newly discovered diaries of the late mobster Meyer Lansky, which appeared in the Los Angeles Times Syndicate, the Baltimore Sun, The New Republic, and Ethical Corporation. A documentary he co-produced on organized crime aired on the Discovery Channel.

Eric is a graduate of Dartmouth College, where he studied political science and the news media. He serves as a Trustee of the Institute for Responsible Citizenship, an organization devoted to fostering educational and career opportunities for outstanding young African-American men. Eric was a founding member of the Board of Directors of the National Ovarian Cancer Coalition. He lives near Washington, D.C., with his family.

Praise For Glass Jaw: A Manifesto for Defending Fragile Reputations in an Age of Instant Scandal…

"Today, one product defect, one offensive remark-combined with the power of instantaneous worldwide social networking-can bring down the mightiest giant. GLASS JAW analyzes how scandals spiral out of control and details the hard work required to regain a lost reputation. Dezenhall's cautionary tales are fascinating-and should serve as a stern warning to anyone with a reputation to lose."—Daniel H. Pink, author of To Sell Is Human and Drive

"I highly recommend Eric Dezenhall's GLASS JAW for anyone interested in reputational risk management in an age where no one is safe from scandal. GLASS JAW is like a wise cornerman teaching you how to take a public punch. No crisis is ever the same, but Dezenhall's book, rich with amusing examples and cautionary tales, will help you recognize if it's better to fight than to throw in the towel."—Ian Bremmer, president, Eurasia Group, and author of Every Nation for Itself

"With GLASS JAW, Eric Dezenhall once again offers fascinating and timely insights into the gladiatorial arena of modern crisis management. Like an Amazing Randi of communications, he debunks anyone claiming to perform PR magic as a fraud. Instead, he offers realistic strategies tempered by hard truths. We've been studying human behavior and how good and bad people react under great stress for quite some time, but we always learn something valuable from Eric."—Former FBI Special Agent John Douglas and Mark Olshaker, bestselling authors of Mindhunter, The Anatomy of Motive, and Law & Disorder

"From Silicon Valley to the factories of the 'old' economy, marketplace power has never been more precarious. Eric Dezenhall's GLASS JAW is to damage control what Taleb's Black Swan is to economics-a jeremiad on how the seemingly powerful are increasingly at the mercy of the seemingly powerless. This book is the field guide anyone in a position of responsibility will want in the foxhole with them when their reputation is on the line."—Deborah Perry Piscione, New York Times bestselling author of Secrets of Silicon Valley: What Everyone Else Can Learn from the Innovation Capital of the World

"During my 30 years of helping people navigate the risks of public life, Eric Dezenhall has emerged as the most effective warrior and teacher. GLASS JAW offers the highest-resolution image of controversy in the new millennium, showing who wins, and how--who loses, and why."—Gavin de Becker, New York Times bestselling author of The Gift of Fear

"This is not a book of morality but pragmatism...[Dezenhall] effectively shows how dramatically things have changed, from a partisan perspective that maintains, 'social media promotes warfare,' and that, as with guerrilla warfare, 'David has become Goliath, and Goliath has become David.'"—Kirkus Review