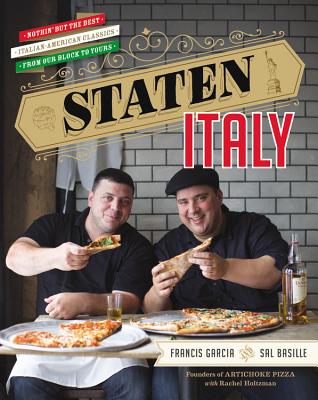 Nothin' but the Best Italian-American Classics, from Our Block to Yours

The delicious Italian-American comfort food we all remember, love, and crave, from the owners of the legendary Artichoke Pizza.

Authors Fran and Sal are two regular guys from the neighborhood, cousins and best friends, whose DNA reads garlic and oil (they're fifth generation in the food business) and whose six hugely successful restaurants, starting with the legendary Artichoke Pizza, have impressed critics, fellow chefs, and chowhounds alike. They have written a book celebrating big flavor, along with loving (and hilarious) family stories, and rooted in the great Italian-American tradition, handed down through the generations.

The recipes are unfussy...simple and fast for school nights, fancier for weekends and holidays and offer readers a transporting, full-bodied take-away, rather than just a book about spaghetti and meatballs. Here you will find Eggs Pizziaola, Pork Cutlets with Hot Peppers and Vinegar, their famous Cauliflower Fritters, and many more authentic dishes served up with gusto.