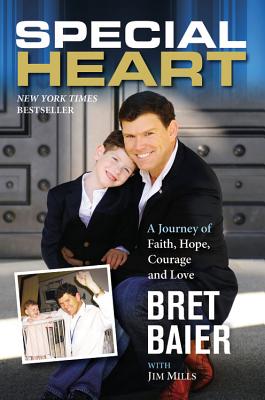 A Journey of Faith, Hope, Courage and Love


Fox News Channel anchor Bret Baier shares the New York Times bestselling story of his son Paul's ongoing battle with heart disease, and how it transformed his own life and family.

This deeply touching personal story is told through the eyes of a journalist as he faces his life's greatest crisis: caring for his critically ill son. With the acute insight of a seasoned reporter, and the deep love of a husband and father, Baier shares behind-the-scenes stories and emotional narrative of young Paul's life thus far. Bret and his wife Amy emerge-just like their brave young son-scarred but infinitely stronger, and clearly understanding what matters most in life. Told by a loving father and master storyteller, this hope-filled account offers an inspirational glimpse into the family of a man who just happens to be someone millions turn to for the day's news.
One hundred percent of what the author receives from the sale of this book is donated to various non-profit pediatric heart causes.

BRET BAIER is Fox News Channel's chief political anchor and anchor of the evening news program, Special Report with Bret Baier (6PM/ET). Before assuming his role as anchor of Special Report in 2009, Bret served as chief White House correspondent for Fox News Channel. Previously, he was national security correspondent for the network. Bret and his wife Amy reside in Washington D.C. with their two sons.

Praise For Special Heart: A Journey of Faith, Hope, Courage and Love…

"Bret weaves an engaging love story around his son's life and death struggle with congenital heart disease and gives hope to all as he chronicles the remarkable medical advances that saved his son."—Mehmet Oz, M.D. Professor and Vice Chair, Surgery NYP/ Columbia University and Host of nationally-syndicated television program, The Dr. Oz Show

"Nothing gives you perspective like a medical crisis affecting someone you love, especially a child. Bret's personal journey through an earth shattering diagnosis and the triumph of faith, family and modern medicine is both harrowing and hopeful."—
Katie Couric, Host of nationally-syndicated television program, Katie Global Anchor, Yahoo

"Love conquers all things, and for Bret Baier's family, it helped heal his son's special heart. This is a story you'll never forget - about a child's devastating medical diagnosis - and his parents' courage to fight for their son and then give back to those who saved his life."—Norah O'Donnell, Co-Host, CBS This Morning
or
Not Currently Available for Direct Purchase
Copyright © 2020 American Booksellers Association