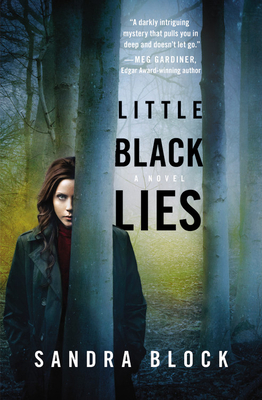 She helps people conquer their demons. But she has a few of her own...

In the halls of the psychiatric ward, Dr. Zoe Goldman is a resident in training, dedicated to helping troubled patients. However, she has plenty of baggage of her own. When Zoe becomes obsessed with questions about her own mother's death, the truth remains tauntingly out of reach, locked away within her nightmares of an uncontrollable fire. And as her adoptive mother loses her memory to dementia, the time to find the answers is running out.

As Zoe digs deeper, she realizes that the danger is not just in her dreams but is now close at hand. And she has no choice but to face what terrifies her the most. Because what she can't remember just might kill her.

Little Black Lies is about madness and memory - and the dangerous, little lies we tell ourselves just to survive.

Sandra Block graduated from college at Harvard, then returned to her native land of Buffalo, New York, for medical training and never left. She is a practicing neurologist and proud Sabres fan and lives at home with her family and Delilah, her impetuous yellow lab. She has been published in both medical and poetry journals. Little Black Lies is her first novel.

"The suspense keeps building throughout until the shocking ending. This is a riveting debut from a promising new author."—Booklist

"Little Black Lies is a darkly intriguing mystery with a feisty young doctor as its protagonist. Sandra Block pulls you in deep and doesn't let go."—Meg Gardiner, Edgar Award-winning author

"Sandra Block's heroine is smart, heartbreakingly vulnerable, and laugh-out-loud funny. I am a forever-fan of the Zoe Goldman series and will read anything Block writes. You should too."—Lisa Scottoline, New York Times bestselling author

"Little Black Lies is a daring, original debut that explores the dark side of memory. In Zoe, Block has created a character who is complicated, smart, and sympathetic. I can't wait to see what Block has in store for Zoe next."—Heather Gudenkauf, New York Times bestselling author