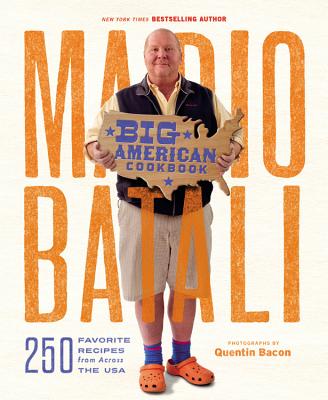 250 Favorite Recipes from Across the USA

Over two years in the making, with Batali searching for truly delicious dishes from all corners of the US, this definitive cookbook features the best America has to offer. With over 250 simple recipes celebrating the treasures of the state fairs and the dishes of the local rotary clubs and ethnic groups. Batali has interpreted these regional gems with the same excitement and passion that he has approached traditional Italian food.

Covering the Northeast/New England, the Mid-Atlantic, the Gulf Coast, the Great Lakes, the Heartland, the Southwest, and the Pacific Coast, this book will share everything from the BBQ styles of Texas, the Smokeys and the Carolinas, to the seafood soups from yankee Boston to the spicy gumbos of the Gulf Coast and the berry pies of the Pacific Northwest.

All the dishes are very simple and do-able--from Philly Cheesesteaks to Marionberry cobbler. And while Batali uses recipes passed down through the generations, he also shares hints on what he would add to the recipe to take the flavor up a notch.

This is THE American cookbook you will want to own.

Batali appears daily on ABC's The Chew, a daytime talk show on ABC that celebrates and explores life through food. He and his co-hosts won their first Emmy as Best Talk Show Hosts this year.

Praise For Mario Batali--Big American Cookbook: 250 Favorite Recipes from Across the USA…

"This colorfully illustrated collection celebrates iconic American cooking with generally easily reproduced dishes that will delight people for a family dinner or for a special event . . . Batali makes every dish look like great fun, and it's impossible not to share his enthusiasm. His popularity alone will make this a required purchase . . . but the variety of content will be welcomed by even those who aren't already fans."—Mark Knoblauch, Booklist

"Culinary details, as well as Batali's essays on his two-year journey across the U.S. (which include further recommendations), set this volume apart from its peers . . . Batali fans and collectors of Americana will appreciate this reliable and well-curated compendium."—Publishers Weekly

"There's not an ounce of pretense amid the 250-plus dishes that comprise the celeb chef's latest offering. Instead, you'll find Batali's talented take on old-school regional fare."—Modern Farmer
or support indie stores by buying on
Copyright © 2020 American Booksellers Association