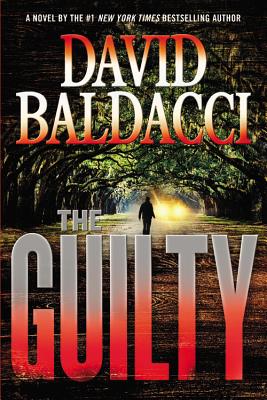 The Guilty (Will Robie series #5) (Hardcover)

Praise For The Guilty (Will Robie series #5)…

"The story sings...Baldacci is a gifted storyteller, and he knows how to keep the pages turning."—Associated Press


"Baldacci fans will not be disappointed. The action is slam-bang with his trademarked twist. Once past the climax, you'll find yourself flipping back and rereading to find the clues the author has sprinkled throughout."
—Florida Times-Union

"A fast-moving thriller that will force readers into that "zone," where you don't want to put the book down....Whether you are a diehard fan or a newcomer to his work, you will not be disappointed in The Guilty."—BookReporter

"A first-class thriller...David Baldacci's four bestselling novels about government assassin Will Robie have straddled that line of edgy, high-concept suspense, augmented with a bit of the political thriller, and deep character studies. In The Guilty, Baldacci takes a different tack with a more personal, but just as thrilling tale about Will's past, giving compelling insight about how he became a man so willing to kill for his country."—Sun-Sentinel (FL)

"Another tremendous entry in the best-selling thrillermaster's increasingly impressive resume...it is the relationships that truly stand out. Among the most noteworthy is the rapport between Robie and Reel, with the professional and personal trust and respect that the two share for one another - having risked it all for each other several times before - feeling believable and compelling, not to mention being the source of a fair amount of witty banter. The tense dynamic between Robie and his father is palpable as well, and their shifting relationship - and how they both deal with the wounds of the past - is one of the book's highlights...A labyrinthine journey full of dead ends and surprising turns, with new reveals doled out at regular intervals as the story builds to its shocking conclusion, a spectacular double-twist climax that will leave even the most jaded thriller readers impressed."—The Strand Magazine

"It's indisputable that Baldacci's handling of action just gets better and better....the action in small-town Texas will end up rivaling anything Robie has encountered in his long years of serving his government."—NJ.com

"David Baldacci has never been better than in THE GUILTY. His latest to feature conflicted assassin extraordinaire Will Robie takes the character - and series - to new heights....A stunning success from one of America's great literary talents."—Providence Sunday Journal
or
Buy Here
Copyright © 2020 American Booksellers Association