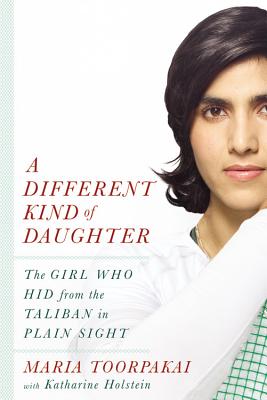 A Different Kind of Daughter

The Girl Who Hid from the Taliban in Plain Sight

"Maria Toorpakai is a true inspiration, a pioneer for millions of other women struggling to pave their own paths to autonomy, fulfillment, and genuine personhood." --Khaled Hosseini, author of The Kite Runner, A Thousand Splendid Suns, and And the Mountains Echoed

Maria Toorpakai hails from Pakistan's violently oppressive northwest tribal region, where the idea of women playing sports is considered haram-un-Islamic-forbidden-and girls rarely leave their homes. But she did, passing as a boy in order to play the sports she loved, thus becoming a lightning rod of freedom in her country's fierce battle over women's rights.

A Different Kind of Daughter tells of Maria's harrowing journey to play the sport she knew was her destiny, first living as a boy and roaming the violent back alleys of the frontier city of Peshawar, rising to become the number one female squash player in Pakistan. For Maria, squash was more than liberation-it was salvation. But it was also a death sentence, thrusting her into the national spotlight and the crosshairs of the Taliban, who wanted Maria and her family dead. Maria knew her only chance of survival was to flee the country.

Enter Jonathon Power, the first North American to earn the title of top squash player in the world, and the only person to heed Maria's plea for help. Recognizing her determination and talent, Jonathon invited Maria to train and compete internationally in Canada. After years of living on the run from the Taliban, Maria packed up and left the only place she had ever known to move halfway across the globe and pursue her dream. Now Maria is well on the way to becoming a world champion as she continues to be a voice for oppressed women everywhere.

Praise For A Different Kind of Daughter: The Girl Who Hid from the Taliban in Plain Sight…

"Armed with a squash racket and enormous will, Maria Toorpakai has risen from the turmoil of tribal life in Pakistan to become not only a world class athlete, but a true inspiration, a pioneer for millions of other women struggling to pave their own paths to autonomy, fulfillment, and genuine personhood."
—Khaled Hosseini, New York Times bestselling author of The Kite Runner, A Thousand Splendid Suns, And the Mountains Echoed

"An intimate look into the lives of women in one of the most hostile places on earth that the eyes of foreigners rarely see. Maria, through courage, defiance, and a supportive family, managed to beat the odds and survive the kind of prejudice and persecution that kills or destroys many other women in the region. A testimony to the resilience of the human spirit."
—Marina Nemat, author of Prisoner of Teheran

A "powerful memoir... The harrowing details of her story include human rights abuses and shameful treatment of women, and Toorpakai's personal account gets to the truth of the matter in a uniquely powerful way."
—Publishers Weekly (starred review)

"A vivid personal account of a courageous young woman standing up to one of the world's most oppressive theocracies."
—Kirkus Reviews

"This astonishing and inspirational memoir chronicles more than Maria's life; it also relates the story of her parents, an incredible couple, who, despite the odds, fought for the betterment and education of themselves, their children, and the Pakistani people."
—Library Journal

"With clarity and captivating sincerity, Toorpakai illuminates the struggles of living under the threat of violence simply because she dreamed of becoming her own champion."
—Booklist

"A DIFFERENT KIND OF DAUGHTER is a sports memoir for people who don't care about sports...vivid and engaging, [it] unfolds in one dramatic scene after another...Vividly written and consistently engaging."
—The Columbus Dispatch

Maria Toorpakai is a professional squash player, currently ranked as Pakistan's top female player and 48th in the world. As a child growing up in a highly conservative tribal area of Pakistan where girls' involvement in sport was forbidden by the local Islamic culture, Toorpakai trained and competed as a boy in Peshawar. Toorpakai currently resides and trains in Toronto, Canada, under former professional squash player Jonathon Power. Toorpakai is the sister of Ayesha Gulalai, who is a Member of the National Assembly representing Pakistan Tehreek-e-Insaf on a reserved seat for women.

Katharine Holstein has lived throughout Europe and North America. Working with actors, personalities and producers, she creates original material for both print and screen. Her writing has sold around the world.