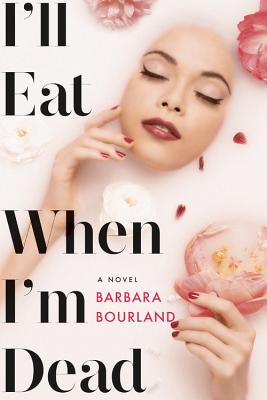 Every weekday morning, as the sun rose above Sixth Avenue, a peerless crop of women-frames poised, behavior polished, networks connected, and bodies generally buffed to a high sheen-were herded by the cattle prod of their own ambition to one particular building. They're smart, stylish, and sophisticated, even the one found dead in her office.

When stylish Hillary Whitney dies alone in a locked, windowless conference room at the offices of RAGE Fashion Book, her death is initially ruled an unfortunate side effect of the unrelenting pressure to be thin. But Hillary's best friend and fellow RAGE editor Catherine Ono knows her friend's dieting wasn't a capital P problem. If beauty could kill, it'd take more than that.

When two months later, a cryptic note in Hillary's handwriting ends up in the office of the NYPD and the case is reopened, Det. Mark Hutton is led straight into the glamorous world of RAGE and into the life of hot-headed and fiercely fabulous Cat, who insists on joining the investigation. Surrounded by a supporting cast of party girls, Type A narcissists and half- dead socialites, Cat and her colleague Bess Bonner are determined to solve the case and achieve sartorial perfection. But their amateur detective work has disastrous results, and the two ingénues are caught in a web of drugs, sex, lies and moisturizer that changes their lives forever.

Viciously funny, this sharp and satirical take on the politics of women's bodies and women's work is an addictive debut novel that dazzles with style and savoire faire.

Barbara Bourland is the author of the critically acclaimed I'll Eat When I'm Dead, a Refinery29 Best Book of 2017 and an Irish Independent Book of the Year. People called I'll Eat When I'm Dead "delectable." Wednesday Martin, bestselling author of Primates of Park Avenue and Untrue, deemed it "a deft, smart, and hilarious debut." Kirkus noted that "death by beauty was never so much fun," and the book was featured in Fortune, Us Weekly, and The New York Post, among others. I'll Eat When I'm Dead is now available in paperback, and is forthcoming in Hebrew from Matar Press in Israel.

Her second novel, Fake Like Me, is forthcoming in June 2019 from Grand Central Publishing in North America and from riverrun abroad. Fake Like Me was written with support from The Wassaic Project in Wassaic, NY, where Bourland was a resident over the winter of 2017-2018.

"A smart, satirical take on fashion and media that will have readers snorting with laughter."—The New York Post

"A whodunnit with a Devil Wears Prada twist...If you love UnReal, then this smart, sassy novel will be right up your alley."—Refinery29

"Let me tell you, contrary to you might have heard, books about fashion can be both smart and funny. Barbara Bourland's snarky debut novel manages to tackle the politics of fashion magazines, the pitfalls and pratfalls being a social media influencer, and the true dangers of the pressures put on women for their appearances and the very real threats to their mental and physical health. And yet Bourland walks the line between serious and comedy so deftly that anyone who has read a women's magazine or caught an episode of America's Next Top Model will understand the jokes and the lessons without conflict."—Fortune

"A murder investigation hijacked by a hotheaded fashion magazine editor and her posse of party girls, narcissists, and socialites--what could go wrong?... Bourland turns a sharp eye to the politics of women's bodies and work environments in this compulsively readable mystery."—Read it Forward


"One part deliciously satirical send-up, one part murder mystery, I'll Eat When I'm Dead had me laughing out loud. This bold and wildly entertaining, in-your-face novel signals the arrival of Barbara Bourland as an exciting and savvy new voice."—Sara Blaedel, #1 international bestselling author of The Forgotten Girls

"I can't put I'll Eat When I'm Dead down, I LOVE it. Biting, funny, and brilliantly subversive; Bourland's debut is like The Devil Wears Prada meets American Psycho."—Louise O'Neill, author of Only Ever Yours and Asking For It

"Bourland's delightfully snarky debut leans heavily on satire, poking razor-sharp fun at the beauty industry and the cut-throat world that Bess and Cat inhabit, and some scenes are laugh-out-loud funny. However, for all the outrageous (and eye-opening) focus on makeup, beauty, fashion, and of course, the desire to be thin, there are tantalizing glimpses of the vulnerability and insecurities beneath the surface. Death by beauty was never so much fun."—Kirkus

"Delightfully, playfully skewering the fashion and beauty industries, this is like The Devil Wears Prada with more feminism, plus murder."—Booklist


"A reckless adventure in the world of starry-eyed models, dubiously sourced drugs, anorexia, and Instagram. But don't let the frills and flashbulbs fool you. Barbara Bourland is here to show you that fashion is a deadly serious business."—Mikita Brottman, author of The Maximum Security Book Club

"A compulsively readable, satirical romp with a sharp and vicious twist, I'll Eat When I'm Dead is a timely, smart, and perceptive mystery,"—K.J Howe, author of The Freedom Broker

"I'll Eat When I'm Dead had me hooked with its biting satire of the fashion world's dark underbelly. And what a heroine! Anyone who has opened up a woman's magazine and despaired at the content should read this book."—Rhiannon Lucy Cosslett, Co-Editor of The Vagenda

"Readers will devour this mystery by Bourland. What at first seems a death by natural causes turns into a murder that will have you guessing at whodunit up until the very end. . . A fun, witty, edge-of-your-seat ride through the demanding and sometimes dangerous world of fashion.—RT Book Reviews

"The darker side of perfection is cast under the spotlight [in this] black comedy."—Sunday Mirror