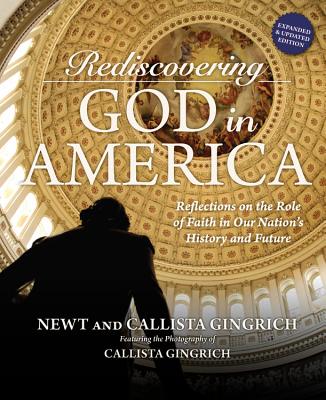 In this New York Times bestseller, join Newt and Callista Gingrich on a walking tour of Washington, D.C. and learn about the great people, events, and ideas that shaped the religious founding of America.

Explore the architecture and beauty of America's capital with Newt and Callista Gingrich. You'll tour Washington, D.C. to view the nation's monuments and memorials, including the United States Capitol and the National Archives, where Thomas Jefferson's immortal words jump off the page.

But this is not just a walking tour; this is a tour of American history -- of the patriotic founders who were shaped by the fervent belief that America is one nation under God. With this guide, you'll rediscover the soul of our country and find a profound path of discovery and renewal.

Callista Gingrich is the author of the New York Times bestselling Ellis the Elephant series. Recent books include Sweet Land of Liberty, Land of the Pilgrims' Pride, Yankee Doodle Dandy, From Sea to Shining Sea, and Christmas in America. She is also the president of Gingrich Productions. Recent films include The First American, Divine Mercy: The Canonization of John Paul II, Nine Days that Changed the World, and Ronald Reagan: Rendezvous with Destiny. Callista is married to former Speaker of the House, Newt Gingrich. She resides with her husband in McLean, Virginia.
Loading...
or
Not Currently Available for Direct Purchase