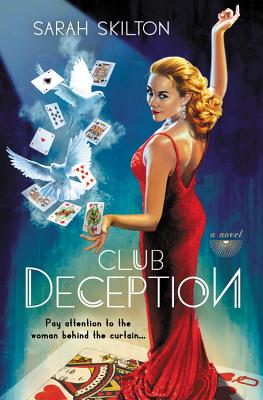 A sexy, glamorous romp through the scandals, secrets and even murder in Los Angeles' most exclusive magician's society.

Welcome to Club Deception where nothing is what it seems ...and love may be the most dangerous illusion of all.

Claire Fredericksson is the beating heart of Club Deception, LA's most exclusive society of magicians. She's the Queen Bee of Magician WAGs ("Wives and Girlfriends"), and the real genius behind her philandering husband Jonathan's award-winning magic show, but her debilitating stage fright has kept her out of the limelight. Until Claire's life is upended by the arrival of two new women to the closed group of magicians' wives- Jessica, a young trophy wife with a secret; and Kaimi, an art expert looking for the long- lost Erdnase papers by posing as a girlfriend. When a magician rivalry and a stolen routine erupt into murder, the women must uncover the truth and set things right for the men they love. With a cast of endurance experts, Vegas stage stars, close-up card handlers and a pick-up artist or two this glamorous novel weaves a tale of murder and fame, and many, many illusions.

"Glamorous, sexy, and full of more twists than a magic show, CLUB DECEPTION put
Sarah Skilton on my insta-buy list!"

"Packed with flash, sizzle and spark, CLUB DECEPTION lays bare the intrigue among a group of scheming modern magicians, both on the stage and behind closed doors. Skilton keeps you guessing until the very last pages -- and you'll revel in every sly, sexy turn of events along the way."—Greer Macallister, bestselling author of The Magician's Lie and Girl In Disguise

"This book unfolds like some of the best magic I have seen. It hooks you in at the start and takes you on a journey that doesn't make you feel like you were fooled, but rather experienced something truly amazing."
—Jon Armstrong, the Academy of Magical Arts' Close-up Magician of the Year, and co-writer of Smoke & Mirrors

"Rollicking suspense with a throw-back 20's vibe...Skilton's sleight-of-hand hides all the tricks until the very end."
—Sandra Block, author of The Secret Room and Little Black Lies

"Sarah Skilton has crafted a fast-paced, sexy mystery that reads like a cross between
Jennifer Weiner and Daphne DuMaurier's Rebecca. I was enthralled by the world of
modern celebrity magicians and couldn't stop reading."

"A bold, skilled storyteller, Sarah Skilton creates a fascinating world of magic and
murder in the deceitfully delicious CLUB DECEPTION. A perfect read for mystery lovers
who like their murder with a dash of glitz and plenty of twists."

Sarah Skilton is a book blogger with Barnes & Noble as well as the author of two young adult novels, Bruised and High & Dry. Her first adult novel, Club Deception, was published by Grand Central in 2017.
Loading...
or
Not Currently Available for Direct Purchase