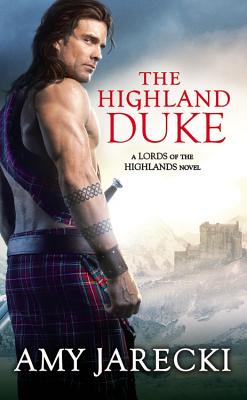 The Highland Duke (Lords of the Highlands #1) (Mass Market)

She'll put her life on the line for him . . .
When Akira Ayres finds the brawny Scot with a musket ball in his thigh, the healer has no qualms about doing whatever it takes to save his life. Even if it means fleeing with him across the Highlands to tend to his wounds while English redcoats are closing in. Though Akira is as fierce and brave as any of her clansmen, even she's intimidated by the fearsome, brutally handsome Highlander who refuses to reveal his name.

Yet she can never learn his true identity.
Geordie knows if Akira ever discovers he's the Duke of Gordon, both her life and his will be forfeit in a heartbeat. The only way to keep the lass safe is to ensure she's by his side day and night. But the longer he's with her, the harder it becomes to think of letting her go. Despite all their differences, despite the danger-he will face death itself to make her his . . .


"Readers get all the benefits of a modern road trip (forced proximity, lots and lots of dialogue, and uninterrupted time for the hero and heroine's love to grow) without technology or secondary characters interrupting the main story arc. About halfway through there is a pretty darn huge plot twist, too. This book kept me on my toes and anxious for more." --Book Riot

Award winning and Amazon All-Star author, Amy Jarecki likes to grab life, latch on, and reach for the stars. She's married to a mountain-biking pharmacist and has put four kids through college. She studies karate, ballet, yoga, and often you'll find her hiking Utah's Santa Clara Hills. Reinventing herself a number of times, Amy sang and danced with the Follies, was a ballet dancer, a plant manager, and an accountant for Arnott's Biscuits in Australia. After earning her MBA from Heroit-Watt University in Scotland, she dove into the world of Scottish historical romance and hasn't returned. Become a part of her world and learn more about Amy's books on amyjarecki.com.

Praise For The Highland Duke (Lords of the Highlands #1)…

"Readers will admire plucky Akira, who, despite her poverty, is fiercely independent and is determined to be no man's mistress. The romance is scintillating and moving, enhanced by fast-paced suspense."—Publishers Weekly

"An action-packed Highland adventure set against the backdrop of the Jacobite rebellion [that] puts readers right into an exciting romance."—RT Book Reviews

"This story was so much more than a romance, it was full of intrigue, excitement and drama. ... a fantastic read that I fully recommend."—Buried Under Romance

"The Highland Duke is a rich, romantic story from start to finish."—Romantic Historical Reviews
or support indie stores by buying on
Copyright © 2020 American Booksellers Association