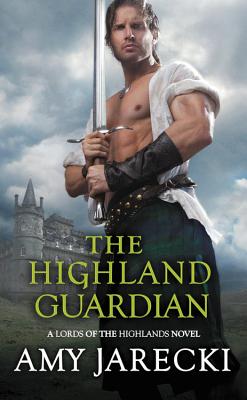 The Highland Guardian (Lords of the Highlands #3)

A Goodreads Best of the Month pick!
He has sworn to protect her...
Captain Reid MacKenzie, Earl of Seaforth, is a man of his word. During a harrowing battle at sea, the heroic Highlander makes a vow to a dying friend to watch over the man's daughter. His plan: send the child to boarding school as quickly as possible so he can continue his mission. But Reid's new ward is no wee lass. She's a ravishing, fully grown woman, and it's all he can do to remember his duty and not seduce her himself.
But he might be her greatest threat...
Miss Audrey Kennet is stunned by the news. First this kilted brute tells Audrey her father is dead, and next he insists she marry. But as Reid scours England for the most suitable husband, Audrey soon realizes the brave, brawny Scot is the only man she wants--though loving him means risking her lands, her freedom, and even her life.

Praise For The Highland Guardian (Lords of the Highlands #3)…

"Magnetic, sexy romance is at the heart of this novel, made complete with a cast of richly depicted characters, authentic historical detail, and a fast-moving plot."—Publishers Weekly on The Highland Guardian

"A true gem when it comes to compelling, dynamic characters. ... With clever, enchanting writing, elements of life-or-death danger and a romance that takes both Reid and Audrey completely by surprise, The Highland Guardian is an historical romance so on point it'll leave readers awestruck."—Book Page

"A must-read new release. Seriously complex and historically detailed, this book kept amazing me with its unassuming tenderness and sweeping prose."—BookRiot

"Romantic! Exciting! Suspenseful! This book reached out, grabbed me by the heart and dragged me back in time to Scotland during the early stages of the Jacobite movement. Once I started reading, I couldn't put it down. ...It is fast-paced, chilling, heart-wrenching and - yes - romantic. What a ride!"—Flippin' Pages

Award winning and Amazon All-Star author, Amy Jarecki likes to grab life, latch on, and reach for the stars. She's married to a mountain-biking pharmacist and has put four kids through college. She studies karate, ballet, yoga, and often you'll find her hiking Utah's Santa Clara Hills. Reinventing herself a number of times, Amy sang and danced with the Follies, was a ballet dancer, a plant manager, and an accountant for Arnott's Biscuits in Australia. After earning her MBA from Heroit-Watt University in Scotland, she dove into the world of Scottish historical romance and hasn't returned. Become a part of her world and learn more about Amy's books on amyjarecki.com.
Loading...
or
Not Currently Available for Direct Purchase