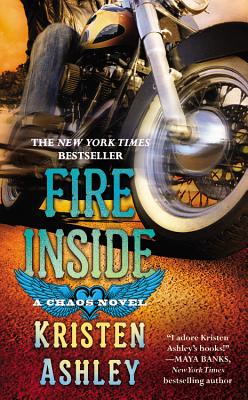 "I adore Kristen Ashley's books. Her stories grab you by the throat from page one and . . . continue to dwell in your mind days after you've finished the story." -- Maya Banks, New York Times bestselling author

Lanie Heron isn't looking for love-no surprise, considering her last serious relationship nearly got her killed. So when Lanie propositions Hop Kincaid, all she wants is one wild night with the hot-as-hell biker who patrols with the Chaos Motorcycle Club . . .

For Hop, Lanie has always been untouchable. She's too polished and too classy for his taste. But when she gives Hop the once-over with her bedroom eyes and offers him a night in paradise, he can't say no. And he doesn't regret it when he finds that Lanie is the best thing that's ever happened to him-in or out of bed. Now the trick will be to convince her of that.

Praise For Fire Inside: A Chaos Novel…

"There is something about them [Ashley's books] that I find crackalicious."
—Kati Brown, DearAuthor.com

"I felt all of the rushes, the adrenaline surges, the anger spikes... my heart pumping in fury. My eyes tearing up when my heart (I mean... her heart) would break." (On Motorcycle Man)
—Maryse's Book Blog, Maryse.net

Born in Gary and raised in Brownsburg, Indiana, Kristen is a fourth generation graduate of Purdue University. Since, she has lived in Denver, the West Country of England, and she now resides in Phoenix. She worked as a charity executive for eighteen years prior to beginning her writing career.
Loading...
or
Not Currently Available for Direct Purchase