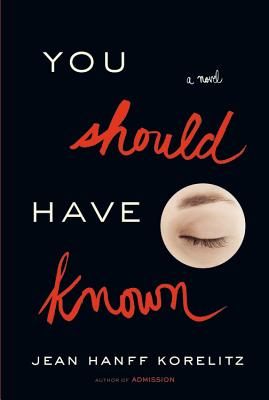 Praise For You Should Have Known…

"An old-fashioned novelist in the best sense, Korelitz takes a subject of consuming contemporary interest and uses it to frame a portrait of a wonderfully complex character confronting the choices she's made and the damage she's done, mostly to herself...Sensitively excavating Portia's personal history, Korelitz stirs compassion for this caring, self-doubting woman. She populates the book with three-dimensional characters who spotlight the obstacles thrown in Portia's path and the helping hands she's been unable to grasp...Well-written, well-plotted and extremely satisfying, "Admission" marks another step forward for a writer whose accomplishments grow more impressive with each book." (Praise for Admission)—Los Angeles Times

"...Jean Hanff Korelitz's compulsively readable new novel...At 449 pages, it's a doorstop-worthy tome. But unlike the painful process of waiting for that acceptance (or, God forbid, rejection) letter, Admission seldom drags...And Admission is that rare thing in a novel: both juicy and literary, a genuinely smart read with a human, beating heart." (Praise for Admission)—Entertainment Weekly

"That Korelitz has previously produced a thriller or two is evident in the sublimely paced plotting of this sharply observed and written novel...[Korelitz] knows her stuff. Better yet, she knows how to tell a story." (Praise for Admission)—The Atlantic

"Intriguing...Yes, there's a crime, but it's the human mystery that keeps us turning the pages."—Alice Hoffman, author of The Marriage of Opposites