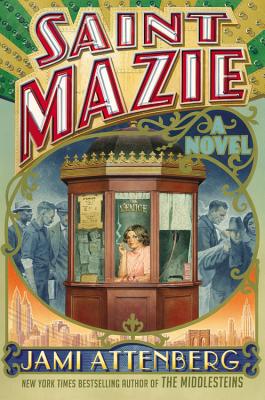 "An exuberant portrait of an unforgettable woman and the city she loves." —BBC.com

"The real-life Mazie first appeared in a 1940 New Yorker profile by Joseph Mitchell and later again in his seminal collection, "Up in the Old Hotel." Now Mazie's latest, and perhaps more powerful incarnation, is in the novel "Saint Mazie" by Jami Attenberg. Here Mazie continues to grab the lapels and hearts of readers - and we are all the more glad for the shake-up she gives us . . . Achieves immortality in the minds and hearts of readers."—Milwaukee Journal Sentinel

"This follow-up to Attenberg's beloved novel The Middlesteins shares many of that book's hallmarks: unflinching examinations of some of people's more unflattering qualities, compassion for the same, and a clear love and respect for the journeys we all must go on . . . her work has the same sense of bonhomie and joy as did the original 'Saint' Mazie."—The L Magazine, #1 on the "50 Books You'll Want to Read This Spring and Summer" list

"I loved it to pieces . . . Through an incredible cast of voices, Attenberg gives us the story of Mazie Phillips, the bawdy, brassy broad who runs a New York theater from the Jazz Age through Prohibition and into the Great Depression. Mazie never marries but has admirers aplenty, and she grows from party girl into community fixture as she devotes her time to caring for the homeless and hungry. The frame and structure Attenberg gives her story are as interesting as the story itself, and the whole experience is a delight. Highly recommended!"—Rebecca Joines Schinsky, Book Riot

"A terrific novel--touching, funny, big-hearted, just like Mazie herself. It's written with great verve and brio, and I loved the way we circle around and then dig deeper into Mazie's life through the multiple voices and sources. It's Mazie herself, though, who shines the brightest, and who lingers on in the mind and heart, a real diamond in the rough." —Monica Ali, author of Brick Lane and Untold Story

"[A] gorgeous love letter to the city...a compulsively readable tribute to a memorable and heroic New Yorker."—Vulture

Jami Attenberg is the author of a story collection, Instant Love, and four novels: The Kept Man, The Melting Season, and The Middlesteins, which was a finalist for the Los Angeles Times Book Prize for Fiction, and Saint Mazie. She has contributed essays and criticism to the New York Times, Real Simple, Elle, the Washington Post, and many other publications. She lives in Brooklyn, New York.
Loading...
or support indie stores by buying on