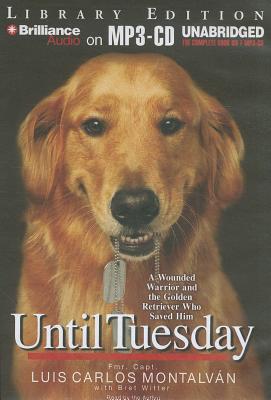 A Wounded Warrior and the Golden Retriever Who Saved Him

A highly decorated captain in the U.S. Army, Luis Montalvan never backed down from a challenge during his two tours of duty in Iraq. After returning home from combat, however, the pressures of his physical wounds, traumatic brain injury, and crippling post-traumatic stress disorder began to take their toll. Haunted by the war and in constant physical pain, he soon found himself unable to climb a simple flight of stairs or face a bus ride to the VA hospital. He drank; he argued; ultimately, he cut himself off from those he loved. Alienated and alone, unable to sleep or bend over without pain, he began to wonder if he would ever recover.

Then Luis met Tuesday, a beautiful and sensitive golden retriever trained to assist the disabled. Tuesday had lived among prisoners and at a home for troubled boys, blessing many lives; he could turn on lights, open doors, and sense the onset of anxiety and flashbacks. But because of a unique training situation and sensitive nature, he found it difficult to trust in or connect with a human being until Luis.

"Until Tuesday" is the story of how two wounded warriors, who had given so much and suffered the consequences, found salvation in each other. It is a story about war and peace, injury and recovery, psychological wounds and spiritual restoration. But more than that, it is a story about the love between a man and a dog, and how they healed each other's souls.