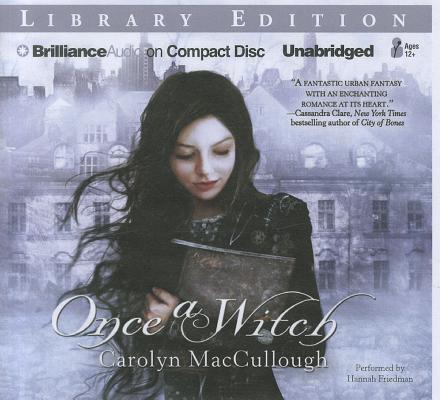 Once a Witch (Compact Disc)

“Once a Witch is the start of a promising new series for teens. In a family where everyone but her has a magical talent, Tamsin Greene is eager to prove herself. But impersonating her ultra-talented older sister lands in a dangerous game as she uncovers family secrets and learns that things are not always what they seem.”
— Miki Wigley, Lee Booksellers, Lincoln, NE
View the List

Tamsin Greene comes from a long line of witches, and on the day she was born, her grandmother proclaimed she would be the most Talented among them.

But Tamsin's magic never showed up.

Now, seventeen years later, she spends most of her time at boarding school in Manhattan, where she can at least pretend to be normal. But during the summers, she's forced to return home and work at her family's bookstore/magic shop.

One night a handsome young professor from New York University arrives in the shop and mistakes Tamsin for her extremely Talented older sister. For once, it's Tamsin who's being looked at with awe and admiration, and before she can stop herself, she agrees to find a family heirloom for him that was lost more than a century ago. But the search -- and the stranger -- prove to be more sinister than they first appeared, ultimately sending Tamsin on a treasure hunt through time that will unlock the secret of her true identity, unearth the past sins of her family, and unleash a power so strong and so vengeful, it could destroy them all.

"Carolyn MacCullough casts a mesmerizing spell with Once a Witch. Family secrets and sibling rivalry, time-travel and magical 'Talents' all brew together to create a superlative -- and supernatural -- coming-of-age story. Add an epic battle of good versus evil and an enchanting first kiss, and this bewitching novel commands a sequel." --Megan McCafferty, New York Times best-selling author of the Jessica Darling series

"Quick and suspenseful, with a climax that is camera-ready, this will appeal to readers who enjoy family drama and teen romance salted with magical action-adventure." --The Bulletin