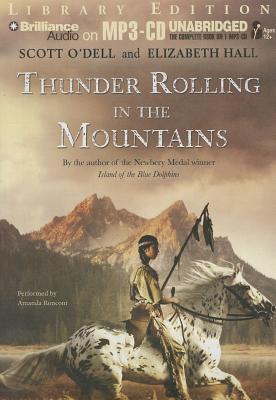 Thunder Rolling in the Mountains

Here we stand. When Sound of Running Feet first sees white settlers on Nez Perce land, she vows to fight them. She ll fight all the people trying to steal her people's land and to force them onto a reservation, including the soldiers with their guns. But if to fight means only to die, never win, is the fight worth it? When will the killing stop? Through the eyes of Chief Joseph's daughter, a brave and independent young woman, Scott O Dell tells of the tragic defeat of the Nez Perce, a classic tale of cruelty, betrayal, and heroism. The graceful narrative of this memorable story is a fitting capstone to the long career of this most distinguished creator of historical fiction. Horn Book.