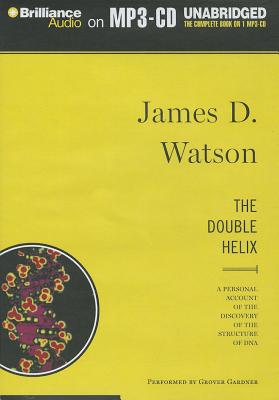 A Personal Account of the Discovery of the Structure of DNA

By identifying the structure of DNA, the molecule of life, Francis Crick and James Watson revolutionized biochemistry and won themselves a Nobel Prize. At the time, Watson was only twenty-four, a brilliant young zoologist hungry to make his mark. His uncompromisingly honest account of the heady days of their thrilling sprint against other world-class researchers to solve one of science's greatest unsolved mysteries gives a dazzlingly clear picture of a world of brilliant scientists with great gifts, very human ambitions, and bitter rivalries.

With humility unspoiled by false modesty, Watson relates his and Crick's desperate efforts to beat Linus Pauling to the Holy Grail of the life sciences, the identification of the basic building block of life. He is impressed by the achievements of the young man he was, but clear-eyed about his limitations. Never has such a brilliant scientist also been so gifted, and so truthful, in capturing in words the flavor of his work.

"He has described admirably how it feels to have that frightening and beautiful experience of making a great scientific discovery." --Richard Feynman

"Like nothing else in literature, it gives one the feel of how creative science really happens." --C. P. Snow