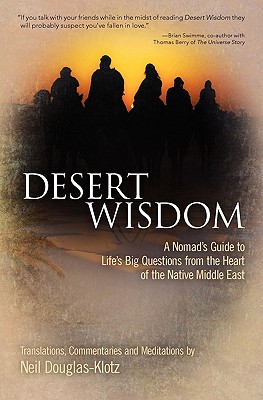 Renowned Sufi scholar and teacher Neil Douglas-Klotz, author of The Sufi Book of Life and Prayers of the Cosmos, has revisioned his acclaimed 1995 classic for the 21st century. Praised by scientists, poets and mystics alike for its ecological approach to "hearing" the native wisdom of the Middle East on its own terms, Desert Wisdom takes us on a journey from ancient Egypt throughout the Middle East to Sufi poets like Rumi and Hafiz. In between, we spend time hearing Genesis the way a storyteller might have told it and sit at the feet of the Aramaic-speaking prophet, Yeshua of Nazareth. Through it all, Desert Wisdom presents us with ancient wisdom about life's biggest questions like:

"Middle Eastern enchantment for the soul. Bravo "
--Fred Alan Wolf, Ph.D., featured in the film "What the Bleep Do We Know?" "Read this book aloud. Let the sounds wrap around your heart. These are translations so unhampered by reduction, stiffness and religiosity that the modern window opens quiet on the ancient garden."
--Carolyn McVickar Edwards, Author of The Storyteller's Goddess "A prophetic and mystical accomplishment of the first order "
--Dr. Matthew Fox, author of Original Blessing and The Reinvention of Work "Open the book anywhere, and you will discover delightful inner openings and insights."
--Shaykh Fadhlalla Haeri, author of Sufi Links and Spectrum of Reality
Already have the first (1995) edition? What's New in Desert Wisdom 2.0: *Seven new translations from the Aramaic words of Jesus. *Ten new translations from the Hebrew (Genesis, Zohar and Dead Sea Scrolls). *Three new translations from the Qur'an. *Book reorganized for better use as an oracle in a similar format to The Sufi Book of Life. *Meditations rewritten and keyed to "Life's Big Questions." *All notes and commentary revised and updated. *New "Quick Start Guide" and Preface. *Complete indexes to meditations and textual strands, plus a new general index *Plus: all translations from the first edition revised and updated, with improved transliteration of original texts.

Neil Douglas-Klotz, Ph.D. (Saadi Shakur Chishti) is a world-renowned scholar in religious studies, spirituality and psychology. Living in Edinburgh, Scotland, he directs the Edinburgh Institute for Advanced Learning (www.eial.org) and for many years was cochair of the Mysticism Group of the American Academy of Religion. He is also cofounder of the international Network of the Dances of Universal Peace. A frequent speaker and workshop leader, he is the author of several books, including Prayers of the Cosmos, The Hidden Gospel, The Genesis Meditations, The Sufi Book of Life, Blessings of the Cosmos and The Tent of Abraham (with Rabbi Arthur Waskow and Sr. Joan Chittister). Known also for this citizen diplomacy work, in 2004, he cofounded the Edinburgh International Festival of Middle Eastern Spirituality and Peace (www.mesp.org.uk). In 2005 he was awarded the Kessler-Keener Foundation Peacemaker of the Year award for his work in Middle Eastern peacemaking.
Loading...
or support indie stores by buying on