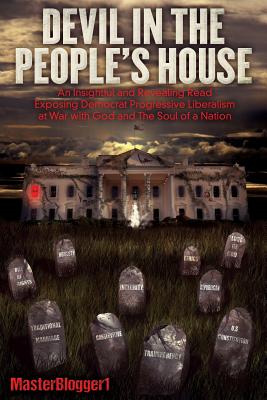 Devil in the People's House

An Insightful and Revealing Read, Exposing Democrat Progressive Liberalism at War with God and the Soul of a Nation

Clouds are gathering throughout the homeland indicating a storm is looming over our beloved America. Old glory blows in a torrential wind of change--ushering in an era of decay and destruction. She has become tattered and worn.

We may possibly maintain the appearance of strength and invincibility for a time--but it is not sustainable. Yes--America will crumble under the duress imposed by the Democrat - Progressive - Liberal - Socialist mindset and agenda.

There is decay beneath the surface--and cracks in our national foundation abound. The world giant is being plundered of its very essence and undermined by an evil force. There is a movement within our gates that encourages and supports wickedness.

If allowed to continue their debased onslaught--Progressive Liberals will succeed in transforming America. They will fundamentally change America into their twisted vision of what our nation should present to God and the world. If their depraved agenda continues to fester and proliferate---this will be the demise of the greatest nation on earth.

This is not a theory but a fact as evidenced by those among us who have eyes to see and ears to hear. This agenda of destruction was conceived in a very dark place--a dark place indeed.

MasterBlogger1 has had a love for the written word since his youth. He readily admits that he is a book and information hoarder poster child. In the early days he dabbled with writing poetry and song lyrics. Through the years he's also submitted numerous articles to the "letters to the editor" section of his local newspaper. He has also designed and written most of his stationary and marketing materials for his business.

MasterBlogger1 is currently writing from his life experience and his concerns about the ever expanding rift between mankind and God. He conveys that if we don't awaken soon----evil will continue to have adverse effects upon the nation he loves. His writings are wise, insightful----and some may even say prophetic----while others may label his work controversial. He asserts that he does not write in fear of the Progressive Liberal "political correctness" police.