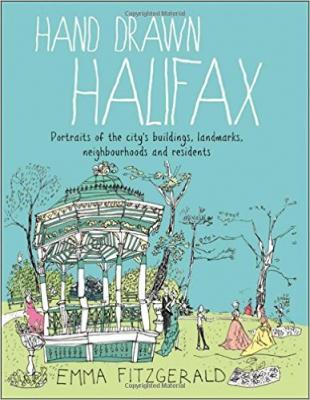 Emma FitzGerald sketches Halifax and its residents vividly, in colour. She effortlessly catches moments in the life of the city. While she draws, she keeps notes on what she sees -- and what people say to her. She has an ear, as well as an eye.

In this sketchbook readers will find spots they didn't even know existed and hear stories they never imagined. Emma overhears conversations in the bookstore, notices prom night in the Public Gardens, learns the recipe for McNabs famous Island lemonade, checks out Ashtray Rock, and finds out where the real fishermen live. The personality and character of the city and its people shine through in the brightly illustrated pages.

"Through her words and illustrations (a mighty combination) Fitzgerald notes those folk who are the bedrock of this city...Fitzgerald's illustrations are alive, shifting, swaying in front of your very eyes. She captures an essence while leaving out the bits and bobs the reader must go and see on their own, those integral aspects of a place that will only be found when you're there on your own, hunting for a piece of treasure." (Atlantic Books Today 2015-09-01)

"A love letter to the city and it's diverse souls." (Jayson Baxter, CTV Live at 5)

EMMA FITZGERALD was born in Lesotho, a small mountainous kingdom in Southern Africa. Her early travels have given her a large appetite for adventure. Combining her interest in people and places, Emma followed a career path that was part architecture, part art. She received her BFA in Visual Art at the University of British Columbia, spending her third year at L'Ecole des Beaux Arts in Paris, where she honed her drawing skills. She then completed her undergraduate and master's degrees in Architecture at Dalhousie University in Halifax. She has worked in architecture offices in Johannesburg, South Africa, and across Canada. While working in Gambia, Emma took students onto the streets of their own communities, using sketching as their primary learning tool. When she returned to Halifax, drawing became an act of connecting with the many stories and unofficial histories of the area, a custom during her travels, but never before in Halifax. This laid the groundwork for her new book.
Loading...
or
Not Currently Available for Direct Purchase