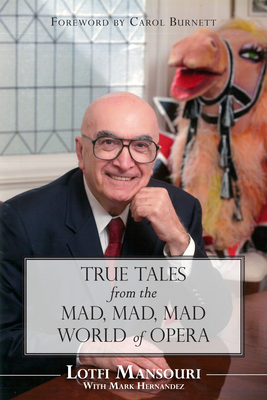 True Tales from the Mad, Mad, Mad World of Opera

An insider's view of the opera world from one of its greatest figures.

Everything about opera is larger than life, but the bigger the art form, the bigger the potential for disaster. When things go wrong at the opera house, they really go wrong. No one has a greater or more intimate knowledge of such moments than Lotfi Mansouri. Over the course of a career that has spanned five decades, Mansouri has directed nearly 500 productions at major opera houses around the globe.

Mansouri has gathered a collection of discrete vignettes that recount unforgettable and revealing moments at the opera as personally experienced or witnessed by him. From unbelievable snafus to unfortunate mishaps to astounding coincidences, these vignettes feature some of the biggest names in opera, as well as prominent figures from politics and more. From the hilarious to the bizarre, this is a reader-friendly look at what is often thought of as an overly serious, even mysterious form of art.

Lotfi Mansouri has been a notable international opera director for decades. In addition to a career in Europe, he has headed both the Canadian Opera Company and the San Francisco Opera. He was named a Chevalier in the French Legion d'honneur and in 2009 received the National Endowment for the Arts Opera Honors Award. Mansouri lives in San Francisco. Mark Hernandez is a professional opera singer. When he's not onstage, he can be found writing, teaching, and opining about the performing arts. For more information, visit blazingstage.com. He lives in San Francisco.
or
Not Currently Available for Direct Purchase