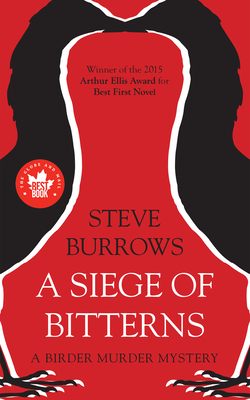 A Siege of Bitterns (Paperback)

Inspector Domenic Jejeune's success has made him a poster boy for the U.K. police service. The problem is Jejeune doesn't really want to be a detective at all; he much prefers watching birds.

Recently reassigned to the small Norfolk town of Saltmarsh, located in the heart of Britain's premier birding country, Jejeune's two worlds collide when he investigates the grisly murder of a prominent ecological activist. His ambitious police superintendent foresees a blaze of welcome publicity, but she begins to have her doubts when Jejeune's most promising theory involves a feud over birdwatching lists. A second murder only complicates matters.

To unravel this mystery, Jejeune must deal with unwelcome public acclaim, the mistrust of colleagues, and his own insecurities. In the case of the Saltmarsh birder murders, the victims may not be the only casualties.

Steve Burrows has pursued his birdwatching hobby on five continents. He holds degrees from York, Dalhousie, and the University of Hong Kong, and is the author of a number of articles on environmental issues. A former editor of the Hong Kong Bird Watching Society Magazine, Steve now lives with his wife in Oshawa, Ontario.
or
Not Currently Available for Direct Purchase
Copyright © 2020 American Booksellers Association