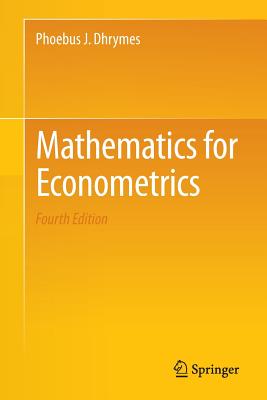 This book deals with a number of mathematical topics that are of great importance in the study of classical econometrics. There is a lengthy chapter on matrix algebra, which takes the reader from the most elementary aspects to the partitioned inverses, characteristic roots and vectors, symmetric, and orthogonal and positive (semi) definite matrices. The book also covers pseudo-inverses, solutions to systems of linear equations, solutions of vector difference equations with constant coefficients and random forcing functions, matrix differentiation, and permutation matrices. Its novel features include an introduction to asymptotic expansions, and examples of applications to the general-linear model (regression) and the general linear structural econometric model (simultaneous equations).

Professor Dhrymes is currently Professor of Economics at Columbia University. Earlier he taught at Harvard, University of Pennsylvania, University of California at Los Angeles, and Monash University in Australia. He is a fellow of the Econometric Society and the American Statistical Association. He has been a managing editor and editor of the International Economic Review, and one of the founding editors of the Journal of Econometrics. Professor Dhrymes serves on the Editorial Advisory Boards of the Journal of Econometrics and Econometric Theory.
Loading...
or support indie stores by buying on