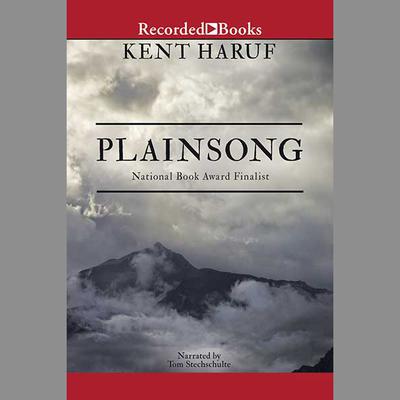 Kent Haruf has received prestigious awards, including a special citation from the PEN/Hemingway Foundation for his finely-tuned works. Before the opening chapter of this novel, Haruf offers a definition. Plainsong is "any simple and unadorned melody or air." Direct yet elegant, Haruf's Plainsong is a hymn to the breadth of the human spirit. A high school history teacher in a small Colorado town, Guthrie is raising his two young sons alone. Thoughtful and honest, he is guiding them through a world that is not always kind. Victoria, one of his students, is pregnant, homeless, and vulnerable to the scorn of the town. When Guthrie helps two elderly ranchers take the young woman into their home, an unlikely extended family is born. As the chapters of these people's lives alternate throughout Plainsong, loneliness and need are transformed into nourishing bonds. Narrator Tom Stechschulte captures the subtle changes that bring the men, women, and children together. His performance highlights every shading of this superb New York Times best-seller.
Loading...