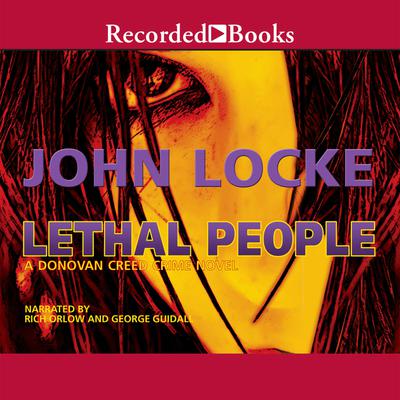 In the first of an exciting new series, Donovan Creed, former CIA assassin and a smartaleck tough guy with a heart of bronze, faces his biggest challenge ever. While pursuing a budding romance with the beautiful Kathleen Gray, Creed stumbles upon a plucky, but horribly burned, little girl named Addie Dawes. Creed's suspicion about the fire that killed Addie's family puts him on a collision course with crime boss Joe DeMeo in what soon becomes an issue of kill or be killed. DeMeo, a relentless killer who will stop at nothing to protect his empire, targets Creed and his loved ones for death. But Creed has plans of his own. Employing a bizarre cast of characters, including a giant, a rival crime lord, an angry midget bent on world conquest, and a team of circus clowns, Creed goes on the attack, with hilarious results. Lethal People is a bizarre, breezy and exciting thriller with excellent pacing, snappy dialogue and quirky characters who will keep you chuckling late into the night. "Donovan Creed, a former CIA assassin, is a very tough man with a weakness for very easy women. Meet him in Lethal People-a relentlessly entertaining crime novel that's often LOL funny! The action is fast and furious, the dialogue smart, savvy and sexy, and the story is filled with quirky characters and clever surprises. What more could you want when you turn the last page except the next Donovan Creed crime novel? Patience, please. You'll be reading Creed's next adventure in the very near future. Lucky you!"-Gerald Gross, freelance editor